Looking Back At Cassini

NASA’s Cassini orbiter will be ending its mission with a grand finale dive into Saturn’s atmosphere on September 15, but it’s accomplished so much in its nearly 20 years of operation.
When it was first launched on October 15, 1997, it was the first mission to be an in-depth study of Saturn and its moons. As a part of that mission, it discovered and studied the hexagonal hurricanes at Saturn’s poles, seen above. It also determined that Saturn’s rings were a dynamic feature instead of just a static disc of gas and dust and imaged the first large structures within the rings themselves. Of the large structures it imaged, it actually discovered six moons: Methone, Polydeuces, Daphnis, Anthe, Aegaenon, and S/2009 S 1; and may have discovered a seventh. However, it increased our understanding of several of Saturn’s moons we had already discovered.

Image credit: Space Engine
Saturn’s moon Iapetus’ two-tone surface had been a mystery to astronomers for some time, but we now know the answer to this problem thanks to Cassini. As Iapetus spins, ice on its surface sublimates (or transitions directly from solid to gas) on the dark side and deposits on the light side.

Image credit: NASA, ESA
It had been known for some time that Saturn’s moon Enceladus was covered in ice, but Cassini made a startling discovery: geysers. Jets of water and ice shooting out from the surface of Enceladus, actually forming a layer in the rings of Saturn. This discovery may not seem important at first, but those geysers suggest liquid water beneath that icy crust, and liquid water is the key to our search for life outside this planet.

Image credit: NASA, ESA
Possibly the biggest accomplishment of the Cassini mission was actually done by the attached probe: Huygens. The Huygens probe became the first to land on a moon in the outer Solar System when it landed on Saturn’s biggest moon: Titan. Titan’s atmosphere and size had led astronomers to believe there to be lakes of hydrocarbons, organic molecules associated with life, dotting its surface. However, Huygens’ landing showed that while there are features like riverbeds, they have since dried up and the hydrocarbon lakes are limited to Titan’s poles.

Image credit: Space Engine
For it’s final leg of the mission, Cassini will dive into Saturn’s atmosphere on September 15, will burn up, and along the way it will be giving us even more information. Cassini will be measuring Saturn’s atmospheric composition and will be mapping its gravitational and magnetic fields.
From all of us at AstroCamp, thank you Cassini! 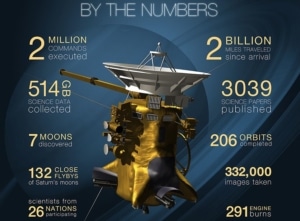