Make Your Own Cloud Chamber

Clouds usually form when water molecules clump together on small particles of dust in the air. These particles are called condensation nuclei. In clean air, they’re hard to come by, so clouds don’t form easily. If conditions are very humid, the air can become supersaturated, or rich with water molecules that would form a cloud if condensation nuclei were available. With nothing to grab on to, though, the molecules stay suspended and invisible… that is, until something disturbs the system. 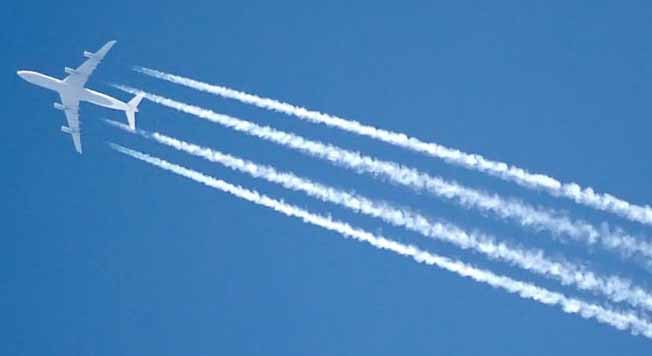 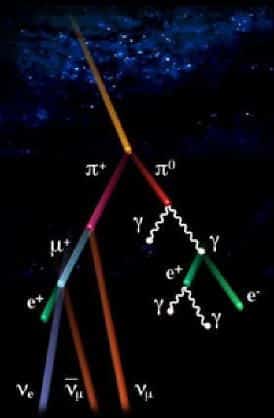 This is a common example of foreign particles triggering condensation. Air molecules themselves can also act as condensation nuclei if they’re electrically charged. One way that air molecules become ionized (or charged) is by colliding with radiation from outer space.
Earth receives a constant shower of cosmic rays. Most primary radiation that reaches our atmosphere comes in the form of ultra-high-energy protons, followed in frequency by helium ions and a smattering of other particles. These decay in the upper atmosphere into elementary particles, which go on to ionize thin streaks of the lower atmosphere as they continue hurtling Earthwards. In a supersaturated environment, the newly charged air molecules act as condensation nuclei, leaving a cloudy trail in the wake of the decayed cosmic radiation. The image at left (courtesy of the PARTICLE program at Rochester University) shows primary rays decaying into pions, muons, neutrinos, and gamma rays.
Below, a streak of mist reveals cosmic radiation as it travels through our tabletop cloud chamber. To see cosmic rays for yourself, you’ll need a contained, supersaturated vapor and a bright light source to highlight cloud trails. Science Friday has an excellent step-by-step instruction set that helped us a lot in our DIY design process– check it out!