Diffusion, Pizza, and You

If you were to take a freshly baked pizza and put you and it at opposite ends of a vault with no airflow at all, would you ever be tempted by its delicious aroma? The answer, it turns out, is yes! Even without the aid of air currents, the smell would spread. Nothing in the room appears to be moving, but at the molecular level, things are very different.
At room temperature, the molecules in stagnant air whiz around at insane speeds– over 1000 miles per hour! The air seems still because molecules are so light that nobody can feel them individually, and there are approximately equal amounts of them going in every direction. However, tiny particles (like the delicious pizza odor) can still get knocked around by these randomly moving molecules. The process of stuff spreading out due to the movement of tiny molecules is called diffusion.

The experiment you see in the video has one obvious difference: we are looking at a liquid instead of a gas. The molecules in water are much more tightly packed, and unlike in a gas, there isn’t as much room for them to zoom around. This means the molecules aren’t moving at such incredible speeds, but they also aren’t sitting still. They bump into one another, rotate, and vibrate like crazy! 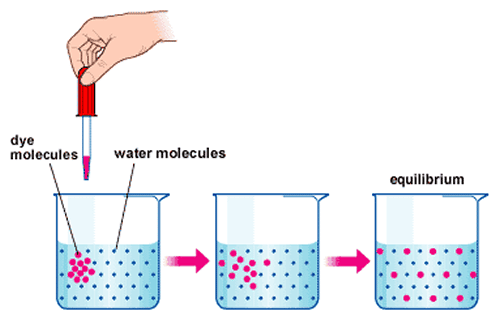 Diffusion causes molecules to spread out from areas of high concentration to areas of low concentration. Image credit: UC Davis
Random movement of tiny things may seem inconsequential, but it’s actually incredibly important. It’s how plants hydrate, hot chocolate cools down, spaghetti noodles absorb water, and even how oxygen gets to the bloodstream. Even more important than all of that however, is that it lets you know when there is pizza nearby!