WARNING: Handle dishes with a potholder, and be aware that they may break if left in the microwave too long. Always keep a fire extinguisher on hand when experimenting with high-energy science.
What do lightning, the aurora, neon signs, and grapes have in common? Plasma! It might be the least familiar of the four states of matter (solid, liquid, and gas are the other three), but it’s actually the most common form of matter in the universe. It’s what stars are made of! 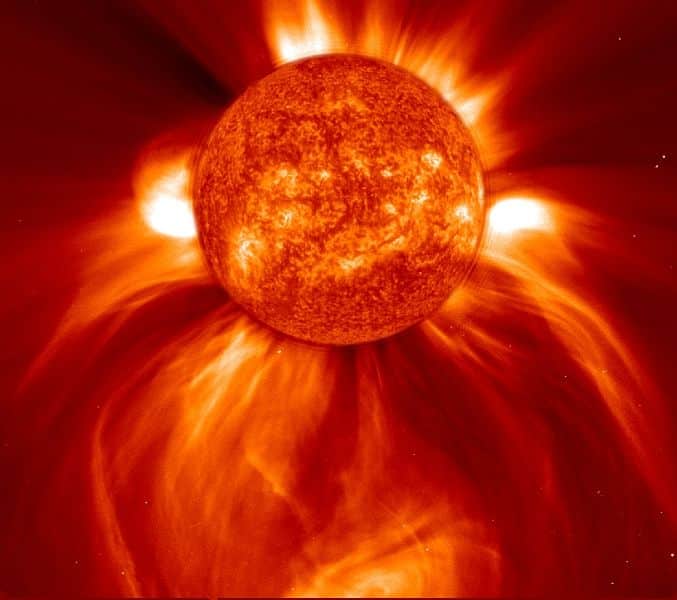 This 2002 coronal mass ejection (CME) on our sun blasted plasma out into space at millions of kilometers per hour! During periods of high solar activity, it’s not uncommon for scientists to observe 2 or 3 CMEs per day. Image credit: NASA
Plasma is what we get when we apply enough energy to a gas to strip molecules of their electrons. This energy typically comes in the form of heat or a strong electromagnetic field like lightning. If you have access to a microwave, you have a great source of electromagnetic waves to work with! Normal microwave use doesn’t produce plasma, though– it takes an antenna to create a strong, steady field.
A microwave heats food by barraging it with electromagnetic waves, causing the molecules inside to vibrate (see previous post for more in-depth microwave science). In this experiment, we’re interested in the waves themselves. A typical microwave oven radiation wavelength is about 12cm, or just under five inches. A line of four grapes is about five inches long. Thanks to this ratio, a grape makes a great antenna for our DIY plasma project!

Here’s why it works: a half-wave dipole antenna is an antenna made of two matching parts, each about ¼ the length of the wave the antenna is supposed to receive. This style of antenna does its job so well that it’s the standard in radar technology and other fields. You may even have seen it in your living room as “rabbit ears”  on a television! Conveniently, grapes conduct electricity well, and a typical grape diameter is about ¼ the size of a microwave oven wavelength. This makes two grapes next to each other (or one halved grape) an ideal antenna for concentrating the waves inside the oven. The grape antenna creates a strong, uniform electromagnetic field… exactly what we need to strip gas molecules of their electrons. Give the field a little time to gain intensity, and BZZZT! Plasma! DIY style!