How Do You Melt Dry Ice?

Dry ice is the solid state of carbon dioxide, the gas we all breathe out, but have you ever seen it in liquid form? When left at room temperature, dry ice doesn’t actually melt; it sublimates, changing directly from a solid to a gas. To understand why, let’s take a look at its phase diagram, a plot of the states of CO2 relative to temperature and pressure. 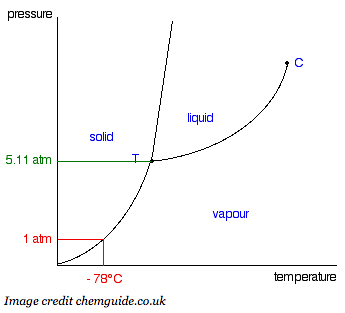 At standard pressure of one atmosphere, liquid CO2 is unsustainable and any solid carbon dioxide above -109℉, or -78℃, directly converts to a gas. In order for liquid CO2 to exist, the pressure needs to be increased to at least 5.11 atmospheres; which is where our pressure syringe comes in.
Substances tend to condense as pressure increases, changing down in state from gas to liquid or liquid to solid or at least making that state change easier. As the plunger of the pressure syringe drops, the pressure increases to the point where dry ice melts rather than sublimating and CO2 can be held in liquid form.

Just as increasing pressure aids substances in changing down in state, decreasing pressure facilitates changing up in state. At sea level, the boiling point of water is 212 degrees Fahrenheit, but if you live at 5500 feet like those of us at AstroCamp, that boiling point is decreased to 201.5 degrees. This 10.5 degree difference may not seem significant, but that’s the result of a change of less than 0.2 atm. In a vacuum chamber, water will actually boil at room temperature because of the immense drop in pressure.