Tornadoes are born when extreme weather circumstances come together. Their short, destructive lives are still not fully understood, but one leading theory goes like this: sometimes, winds at different altitudes blow at different speeds, rolling the air between them into a horizontal, rotating cylinder. If a supercell thunderstorm is nearby, the spinning column can be pulled into the maelstrom. Once the tornado is vertical, its lower end has the potential to touch down and wreak havoc on Earth’s surface. 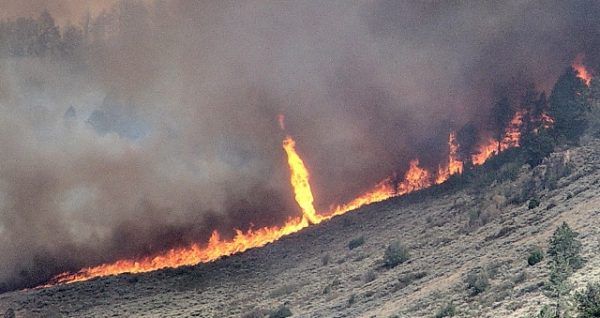 West Texas wildfire. Image credit: Texas Forest Service.
In a real supercell, swirling updrafts are created by variations in temperature, pressure, and wind speed in the storm area. In this experiment, we simulate updraft conditions by physically pushing the air into a rotating column formation using a window screen rolled into an open-ended cylinder. Without the screen (and the wind it generates), the spinning fire doesn’t do anything especially interesting. That’s because of Bernoulli’s principle: the faster a volume of fluid moves, the more neighboring molecules are sucked into the breeze. By giving the air a push, we draw extra oxygen in towards the flame.

Fire tornadoes are spectacular in the lab, but you don’t want to see one in nature. These twisting ropes of flame have played a tragic role in several of the greatest conflagrations in human history. From Chicago to Peshtigo to Tokyo and beyond, they’ve spread blazes with devastating speed and blocked victims from reaching safety in nearby bodies of water.
At least one team of researchers is working towards harnessing the power of the fire whirl for practical purposes. Hot, clean-burning blue fire tornadoes show potential as a tool for improved oil spill cleanup.
As with any experiment involving combustion, check in with an adult, keep a fire extinguisher on hand, and exercise caution if you decide to make a flaming tornado at home. We used a turntable with a heat-safe covering, a non-flammable window screen stapled into a cylinder, duct tape, a glass flask, and a few ounces of 99% isopropyl alcohol to create our fire whirl.
Written By: Caela Barry