Soap in the Microwave Experiment

Woah! What just happened? To try and understand it, lets take a closer look at the Microwave. These are often thought of as magic food reheating boxes, but they are actually quite interesting!
Microwave ovens heat food by bombarding it with electromagnetic radiation, also known as light. Unlike the light most of us think of when we use that word, microwave light is invisible. All light travels in the form of waves, and these particular waves are stretched out too much for the human eye to detect.

Eyes are great for detecting light, but they can only detect certain wavelengths of it. Most light is actually outside the realm of the human eye! Scientists often build telescopes to look at these other kinds of light like ultraviolet, x-ray, infrared, and even microwaves to see what it is that we are missing when looking at the sky with just our eyes.

Microwaves are also the perfect length for transferring heat energy to food. As the electromagnetic waves move through it, they bend the polar molecules (molecules that have positively charged and negatively charged ends)! As the molecules wiggle in microwaves, they bump into one another and speed each other up. Temperature is really just a way to measure how fast the molecules in something are moving, so as the molecules wiggle faster and faster, the food heats up! Just as importantly, they also heat up any pockets of gas that are trapped inside of whatever we’re trying to warm.
Ivory soap contains a huge number of microscopic air bubbles. When the microwave oven begins heating, two important things happen: the soap itself softens and melts, and the air trapped inside the soap expand.

This is due to Charles’s Law, discussed here. Ultimately, the tiny air pockets in the Ivory soap grow into a giant froth of bubbles. You may have seen this process before… it’s the same science that causes popcorn to morph from small, dense kernels into fluffy, bite-sized chunks!

So, have we fundamentally changed the soap? Not much! We’ve just made it take up more space. If you try this experiment at home, you’ll find that the solid suds still work. Be sure to let your creation cool for a few minutes before you touch it. 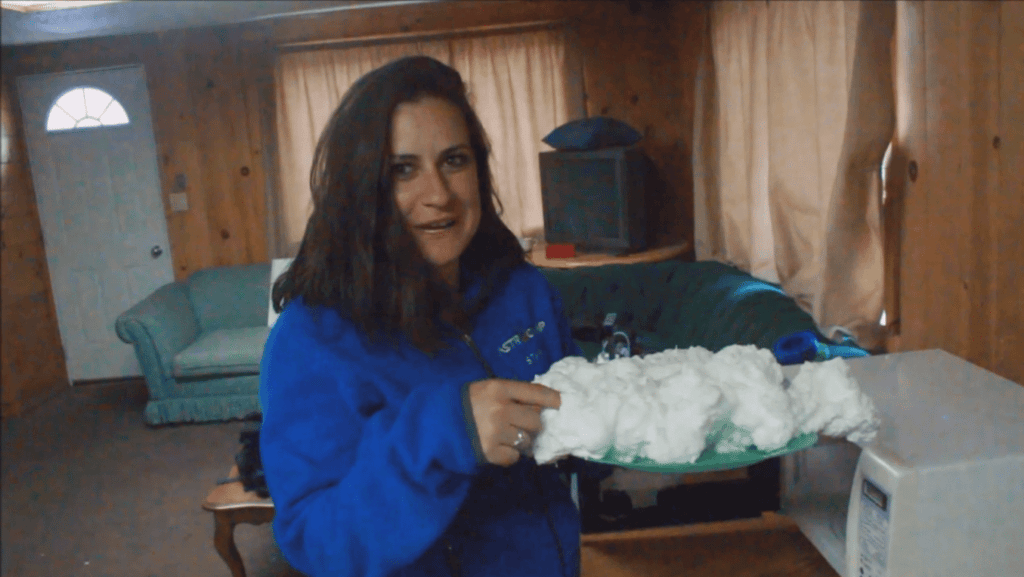