Think you could stand still with a bowling ball swinging towards your nose? It’s tough! This scary experiment is governed by the same principle that decides the dynamics of a car crash and guides trick shots on a pool table: a gigantically important physical law called conservation of energy. This law states that if a system is left alone, its total energy doesn’t change. 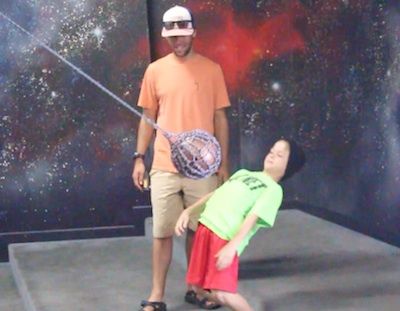 No physical system is perfectly efficient. Air resistance and stretch in the tether damp the swinging bowling ball’s momentum. A tiny bit of energy is dissipated with each turn of the pendulum until, finally, it comes to rest. Since each pass of the bowling ball carries less energy than the one before, the pendulum swings a little lower every time. As long as you drop the weight cleanly from your nose, it’s perfectly safe to stay put.

It’s one thing to know that the bowling ball can never swing back up to its original height and crash into your nose… it’s quite another to override your body’s instinct to flinch or step back!