Leonardo da Vinci was a mind ahead of his time. He didn’t live to see the realization of most of his thousands of pages of inventor’s notes and sketches, but his vision was practical and insightful. Modern experimenters have used updated materials and technology to bring many of his designs to life. His innovations in structural engineering influence present-day bridges, helicopters, tanks, and more. 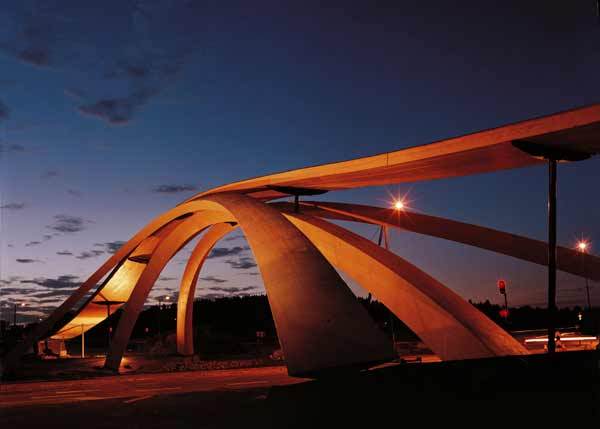 Artist Vebjorn Sand made this bridge a reality in modern Norway 500 years after da Vinci first designed it. Its 740-foot span was unprecedented at the time of its invention. Image credit: North Coast Cafe, South.
In honor of his birthday, we set out to find and build a simple, DIY-friendly da Vinci invention. His war machines and flying devices are both intricate and clever. One project stood out as more approachable than the rest: the da Vinci parachute. 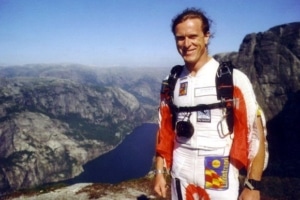 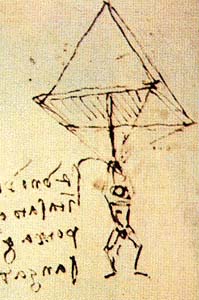 Adrian Nicholas, the professional skydiver who tested the Da Vinci parachute in 2000, and Leonardo’s original schematic sketch. Left image courtesy of www.thesundaytimes.co.uk.
Hundreds of years before the invention of the modern parachute, da Vinci conceived of a pyramid-shaped canvas tent that would slow the fall of a heavy object. He envisioned the structure protecting jumpers from burning buildings. It’s a far cry from today’s ultra-lightweight and compact drag technology, but his design is a practical one– mostly. Daredevil Adrian Nicholas constructed and tested the unusual chute in 2000. Its descent from a hot air balloon 10,000 feet above Earth’s surface was slow and smooth, and the chute landed with minimal damage. Nicholas nonetheless cut loose from the canvas tent at an altitude of 3,000 feet and finished his jump with modern gear to avoid being injured by the 187-pound structure on landing.

Our da Vinci experiment began with a prototype made of four sheets of printer-size paper and a 15g weight. Next, we scaled our chute up, cutting each side of the pyramid from a sheet of poster paper. We didn’t reach the human-carrying level, but did drop an otherwise unprotected egg from a second-story balcony– it survived! 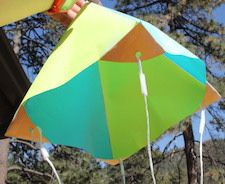 We’d definitely recommend trying this at home. The size and shape of the parachute are deceptive, and its stately, surprisingly stable flight is a lot of fun to see in person. Consider reinforcing the corners of your chute’s base with right angles made out of paper or another structural element to help it keep its square shape, as shown on the right. Happy testing!
Written By: Caela Barry