Godzilla El Niño and You

You’ve probably heard a lot about this year’s El Niño, which is predicted to be the biggest since 1998. What exactly does that mean? This global weather phenomenon has complex and far-reaching consequences, but the mechanism behind it is simple! 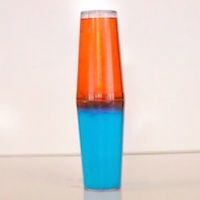 Let’s start by considering normal weather patterns in the Pacific ocean. Water near the surface is heated by the sun. This warm upper layer floats on top of cooler, denser ocean depths, resulting in a dramatic temperature barrier called the thermocline. At left, we’ve modeled the thermocline in a plastic container: warm water is colored red, and cool water is colored blue. Because the warm water is less dense, it floats.
In a non-El-Niño year, equatorial trade winds blow strongly from east to west, moving surface water along with them. In the Pacific, these winds push the warm upper layer of the ocean towards Australasia. Cooler water wells up in the east to fill the space left by the warm water moving out. As a result, the thermocline sits at a slant. Surface temperatures are normally warmer in Indonesia than Ecuador by about 45 degrees Fahrenheit.
This tilt in the thermocline is responsible for the typically wet climate in Southeast Asia and relatively dry conditions along the Americas’ equatorial Pacific coast. Warm water near southeast Asia and Australia evaporates and blows inland, resulting in lots of rain. Cool, nutrient-rich water from deep in the ocean sustains whole ecosystems in the eastern Pacific, but doesn’t generate much precipitation.

During an El Niño year, the thermocline shifts, resulting in warmer than normal surface temperatures in the eastern tropical Pacific. Animation credit: NASA Goddard
In an El Niño year, trade winds weaken. With nothing to hold it in place, warm surface water sloshes eastward towards the Americas, leaving the western Pacific cooler than normal. Australia and southeast Asia experience drought conditions. The equatorial Americas see unusually intense precipitation, which comes in the form of coastal flooding in some regions and severe winters in others. Since warm water doesn’t vacate the eastern ocean, cool water can’t well up to replace it. Coastal ecosystems that depend on deep-ocean nitrates and phosphates struggle, undermining economies that depend on industrial fishing.
El Niño is defined as unusually warm surface water in the eastern tropical Pacific, but its consequences extend around the world. North of the equator, the western U.S. sees intense winter storms. Across the ocean, unseasonably dry weather disrupts agriculture in Indonesia, Australia, and even South Africa.
Although the thermocline’s oscillation isn’t precisely predictable, it is part of an ocean temperature cycle that repeats every two to seven years. So, yes, it’s going to be an intense season! That said, this is nothing that hasn’t happened before, and we’ll likely see a new “Godzilla” El Niño in another decade or a few.
Written by: Scott Alton, Caela Barry