Fire & the History of Matches

NOTE: DO NOT TRY THIS AT HOME!
Humans have been creating and controlling fire for almost a million years! Our early ancestors used friction – essentially rubbing sticks together – to create their first fires for cooking food and making tools. Today we can carry fire making tools around in our pockets.  Every year 500 billion matches are used in the United States alone. Even though we’ve come a long way from rubbing sticks together, matches today work on a very similar principle – friction. For an example of this, you can try rubbing your hands together. You should feel them get warm. It should not start a fire.
Match bodies are made of wood or stiff paper, to provide fuel for the fire. Match heads are coated in phosphorous based compounds that catch fire when heated up. The heat that lights a match generally comes from friction when you rub or “strike” a match on a rough surface. Early “strike anywhere” matches were coated in white phosphorous, but the white phosphorus was too easy to light. This made them rather dangerous, as they tended to ignite accidentally. Great if you needed to light a fire in a hurry…but not so great if you need to ship them long distances, or keep them for a long time.

To get a combustion reaction like this to start requires something in chemistry called “activation energy”. This simply refers the amount of energy needed to start the reaction. These matches lit so easily because the white phosphorous in the match head needed very little energy to light. Simply rocking around in a crate could cause enough friction to ignite them. Today’s strike anywhere matches use a less dangerous form of phosphorous (phosphorous sesquisulfide). They can still be lit on any surface rough enough to create the right amount of heat from friction, but anyone who has tried (and failed) to light a match multiple times can tell you it takes a bit more effort.
In the video, the bright parts you see as the fire moves along consuming all of the matches is this phosphorus beginning to ignite. It doesn’t last very long, and its job is just to keep the match burning long enough for it to get hot and start burning the wood, which is what sustains most of the flame that you see in the end! 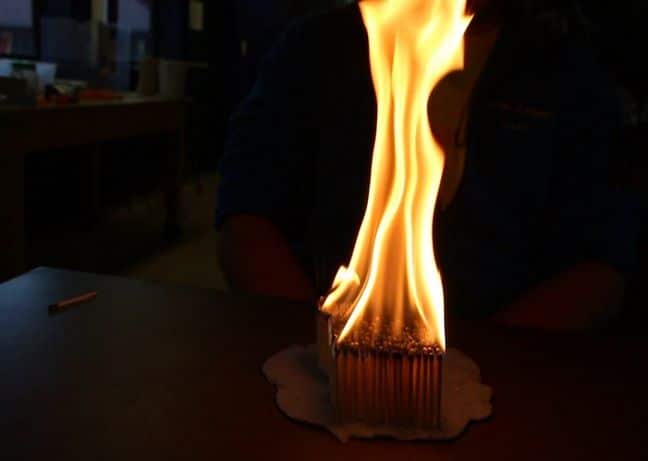