The Life and Death of Stars

Did you know that stars live and die just like other living things?…Okay, maybe not just like them. But they do have a beginning, middle, and end. All stars start out the same way, from a nebula. A nebula, otherwise known as a “star nursery”, is a cloud of gas and dust out in space. Nebulae will then start to clump up due to the massive amounts of gravitational pull. This clumping creates protostars, which are basically spherical masses of the gas and dust that are collecting even more gas and dust from the nebula.

Once the gravity of the protostars becomes great enough, the process of fusion will begin, turning the protostar into a star. A star is defined to be a self-luminous gaseous spheroidal celestial body of great mass which produces energy by means of nuclear fusion reactions. Fusion is the act of turning lighter elements into heavier ones which can only occur under great pressures.
Depending on the original mass of the nebula and protostar, a star can be of any number of sizes. For our purposes, let’s stick with an average sized star (like our Sun),  a massive star, and a supermassive star.

For a Sun-like star, once it has completed fusing hydrogen into helium it will become unstable and swell in size, becoming a red giant. As a red giant, it will have a thin outer shell of some hydrogen gas, and an inner core of mostly helium. Once the helium runs out, it will become extremely unstable and puff out it’s shells of hydrogen and helium, becoming a planetary nebula. One example of this is the Ring Nebula (M57). Left in the center is a white dwarf star, which is named so due to how hot and luminous it is. When the white dwarf radiates its energy away, it will fade, becoming a brown (or black) dwarf star.

For a massive and supermassive star: they will go through the fusion process, become unstable, puff out a shell, swell to a red supergiant, start the next round of fusion, and so on and so forth, creating heavier and heavier elements. Once the massive and supermassive star become extremely unstable they will go supernova. A supernova is the largest explosion in space, which is very bright and ejects most of its mass. 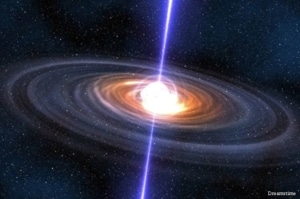 When this happens for a massive star, a neutron star will be left behind. A neutron star is a celestial object with very small radius (typically 18 miles/30 km) and very high density, composed mostly of closely packed neutrons. Neutron stars also tend to rotate extremely quickly and emit regular pulses of radio waves and other electromagnetic radiation, earning them another name, pulsars.For a supermassive star, it will follow the same path of a massive star, but with one key difference. Instead of leaving a neutron star behind after the supernova, it will leave behind a black hole. A black hole is simply a region of space having a gravitational field so intense that no matter or radiation can escape.
Supernovae create the heaviest elements in our universe, which are the building blocks to life as we know it. Without this constant cycle of creation and destruction, we would have nothing. So the next time you look up in the sky, be thankful to that glowing orb of incandescent gas and all of the gas and dust that came before it.