Nothing is more exciting than looking up and seeing a shooting star streak across the night sky. But we all know it’s not really a star falling from the heavens, but rather a giant ball of rock, ice and dust skimming through the atmosphere.
This December we will be able to witness one of the most famous and spectacular meteor showers of the year. The Geminid Meteors will be in view between December 4th and December 16th. However, it will peak on the night of December 13th at roughly 10:00 PM, with the possibility of sighting about 120 meteors per hour.

Unlike most other meteor showers, these meteors don’t come from a comet flying through Earth’s atmosphere. Instead, they come from the asteroid 3200 Phaethon. 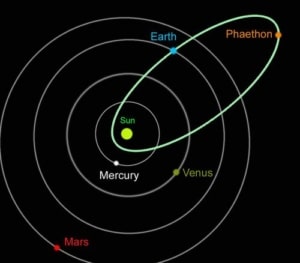 Due to 3200 Phaethon’s highly elliptical orbit and maximum distance from the sun, takes about 1.4 years to orbit it. It has a debris trail in orbit and once a year, Earth runs into this dusty path, which intersects our planet’s path through space. It gets extremely close to the sun, only 13 million miles from it (Earth is about 93 million away from the sun).
Unfortunately, December’s supermoon may wash out all but the brightest meteors. But, facing south can be helpful to view them, since this is where they appear to emerge from. With or without the supermoon be sure to check it out, it’ll be a sight worth seeing!
Written By: Mimi Garai