From Art to Action: Mythbusters 101

Great teachers know the classroom is a stage and leverage that knowledge to create exceptional experiences for students. Classroom audiences have the advantage of being able to interact physically as part of the learning process. If viewers happen to be on the other side of a TV screen, showmanship and energy have to compensate for physical distance. Who better to bring explosive, larger-than-life science to living rooms worldwide than a team of accomplished special effects artists? The rotating crew of guerrilla experimenters known as the Mythbusters is just that. 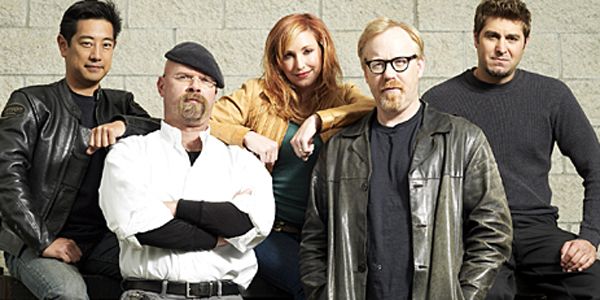 Left to right: Grant Imahara, Jamie Hyneman, Kari Byron, Adam Savage, Tory Belleci. Image credit: Discovery Channel
In their own words, they’re not scientists. The team’s collective work experience is astoundingly broad, with pre-Mythbusters gigs ranging from divemaster to welder to wilderness survival specialist to successful artist and beyond. Their special effects credentials include such franchises as Star Wars, The Matrix, and Terminator. In a 2010 interview, co-host Adam Savage calls the show’s dynamic cast of builder-experimenter-hosts “unencumbered by training.” 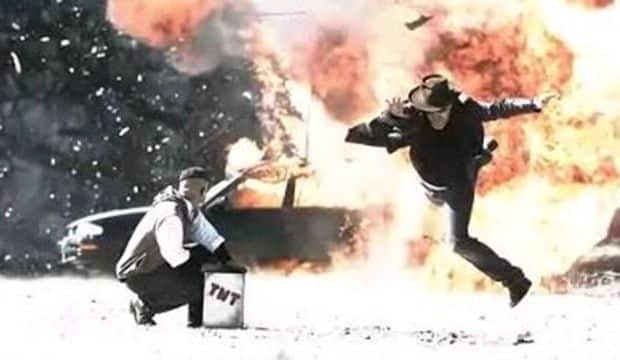 This 2009 explosion, designed to test whether it’s possible to knock a person’s socks off, unexpectedly broke windows over a mile away. Mythbusters replaced the shattered windows on the day of the incident. Image credit: Discovery Channel
Co-host Jamie Hyneman agrees: “if we knew what we were doing we wouldn’t be entertaining.” These experimenters aren’t teaching their expertise, they’re problem-solving and learning in front of an audience– and that’s a huge part of their appeal. Hollywood artistry and resources take viewers along on a wild crash-test of a ride. It’s raw curiosity armed with action movie appeal, contagious enthusiasm, and a whole lot of imagination. The Mythbusters are popularizing a pure, accessible form of science. Ask an interesting question, design a test, learn something new, and have fun doing it. This is exactly what kids need to see.

AstroCamp science question of the day: how big a cloud can we make if we pour all of our leftover liquid nitrogen from the dining hall deck into a tub of hot water? Answer: this big!