A Supernova For Breakfast (Almost)

Iron makes up less than one one-hundredth of one percent of the human body. Most adults contain just a few grams of this micronutrient. Despite its small presence in humans, it’s essential to our lives. Without it, oxygen can’t get from the lungs to the rest of the body. Iron also plays a key role in energy production and DNA synthesis.
The human body can’t produce all the materials it needs to function, so we get vitamins and minerals from food and supplements. We don’t often directly observe substances like iron, calcium, or vitamin A in our food because they’re present in such tiny amounts. Iron, however, has an unusual property. It’s magnetic, so it’s relatively easy to sort out from other ingredients!

Trace amounts of magnetic material in a whole food item aren’t strong enough to break free from the larger structure, even in the presence of a strong magnetic field, so it helps to start with something that can be broken down into small parts. Breakfast cereal is one food that’s commonly fortified with iron and is also easy to crush into a powder. Bring a powerful magnet near the powdered cereal, and iron-rich fragments jump out. 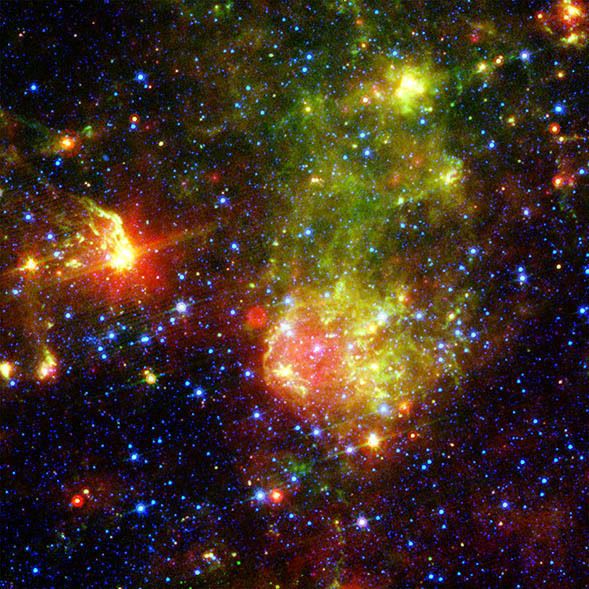 Supernova remnant 1E0102.2-7219, visible near nebula M76 in the Southern Hemisphere, is an approximately 1,000-year-old leftover from the explosion of a huge star. Credit: NASA/JPL/Spitzer Space Telescope
Iron plays an important part in the lives of stars, too, as the end product of stellar fusion. After lighter elements in a very massive star’s core have fused into iron, the core begins to cool and condense. Central cooling causes outer layers of plasma to fall violently inwards, collide with the iron core, and blast back out into space. This incredibly energetic explosion is where all elements heavier than iron come from, including calcium, which is also essential to human biological function. (Lighter elements, including oxygen, come from fusion inside smaller stars.) From hydrogen to carbon to iron and beyond, you are literally made of star-stuff!
Written By: Caela Barry