Why do Astronauts Float in Space? 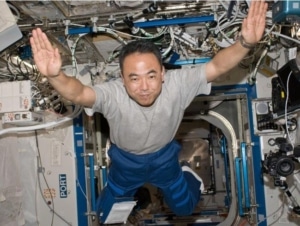 Did you know that astronauts on the International Space Station (ISS) experience about 90% of the gravitational acceleration that we feel on Earth’s surface? That might seem strange, especially since when we look at them, they are always floating around. While this makes it tempting to say that there is no gravity in space, that is quite clearly very far from the truth, so why do they float1?

On Earth, we are pulled down towards the Earth at 9.81 meters per second squared, meaning that if we weren’t pressed up against the ground, our speed would increase by 9.81 meters per second every second! This is known as free fall. This is something that can be experienced during the initial phase of a skydive, during turbulence in an airplane, or while going down a steep part on a roller coaster. It is often accompanied by a weird queasy feeling in the stomach.
By taking a water bottle and drilling some holes in it, we can see why the astronauts are weightless. Both the bottle and the water are being subjected to Earth’s gravity. When the bottle is held still, the water falls out through the holes because gravity is pulling it down. Then, when the bottle is released, they are both pulled down at the same rate. With no difference in acceleration between them, the water floats happily inside the bottle and doesn’t go out the holes at all. This is actually what is happening to those astronauts.

Why Does the ISS Not Plummet Back to Earth?

When something is in orbit around the Earth, it is being pulled down by the force of gravity. For the ISS, this is about 9 meters per second squared! If the ISS wasn’t moving above the Earth, it would fall to the surface in less than an hour. However, Astronaut Scott Kelly was just on board for a year and didn’t plummet to his fiery doom. This is because the ISS is not staying still. Not even a little bit.
The ISS goes at about 17,000mph, which is over 10 times the velocity of a speeding bullet. This is entirely necessary, because as gravity yanks the ISS down towards the surface, the space station has moved far enough to miss the surface. This balance is very precarious. If the ISS were going faster, it would instead get farther away from the Earth each time and escape into space. If it were going slower, it would constantly get closer to the Earth, which is not what we want2.
How do astronauts train to get used to this? Let’s go back to the water bottle demonstration again. Take a second to think: What would happen if instead of just dropping the water bottle, we threw it up in the air? Let’s take a look!

While you might think that the water will come out on the way up and stay in on the way down, it instead turns out that the water stays inside the bottle from the moment it is free of the hand. This means it is also in freefall while it is going up, which seems strange, but both the water and the bottle are subjected to the same gravity with no other outside forces for the same time. To train the astronauts, they do the same thing, but with an airp 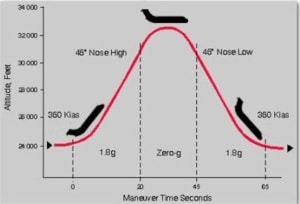 lane. This plane, cleverly and unpleasantly known as the Vomit Comet, flies up and then coasts through the air, allowing it to continue up in a similar trajectory to the bottle. Then, before it hits the ground, the pilots pull up and go skyward for a bit before repeating the process again. As you can imagine, it’s enough to make anyone a little queasy3.

To learn more about gravity, astronauts, and space, sign up for AstroCamp today. Dates and rates are now live for next summer, and we hope to see you there for all of our space camp activities!

1Image: Satoshi Furukawa floats aboard the ISS. Photo credit: NASA
2This is a real issue. The ISS slows down slightly due to the outer reaches of the Earth’s atmosphere. As a result, they use thrusters to get back up to speed about once a month!
3Image: Trajectory for the Vomit Comet. Courtesy of NASA

What is a Black Hole?