What is a Black Hole?

Black holes are a confusing topic in astronomy. You’ve heard about them starting from a young age, but whenever you ask someone for more information about them, there’s a whole lot of “I dunno’s” about those mysterious cosmic vacuum cleaners that tear apart and suck up everything around them. These exotic objects make for excellent science fiction and have a reputation for being incredibly complicated. While they can live up to their complex reputation, at a basic level they are actually not too difficult to wrap your head around!

The first step on the road to understanding black holes is understanding how gravity works. An object with mass will cause a bend in spacetime, affecting other objects around itself. This effect is what causes gravity. The more mass something has, the more gravity it produces. The force of gravity gets weaker the farther you get from the center of mass proportional to the inverse of its distance squared. Yeah, I know, that sounds confusing. Maybe it’s easier if you see the equation for calculating the force of gravity:

Black holes have a LOT of mass, which is why they have so much gravity. So much, in fact, that atoms are actually crushed to fill in the empty space. Sometimes a dying star has enough mass (and gravity) to crush atoms, but not quite enough to keep light from escaping. In these cases, a neutron star is born. These strange objects contain as much mass as the sun, but are squeezed into a space smaller than New York City. Put another way, a soup can of the stuff would weigh about as much as the mountain that AstroCamp lives on! 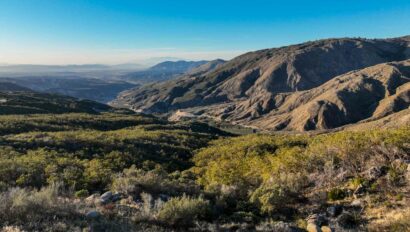 Jumping up in the air on Earth is a short-lived journey. An average person starts their upward flight with a speed of about 7 miles per hour. Our planet’s gravity quickly overwhelms that momentum, and the jumper lands. However, if someone could jump at 25,000 miles per hour, they could escape Earth’s gravitational pull and continue into space! Every planet and star has a special speed requirement to escape its gravity. We call this speed the escape velocity.

Learn More About Space at AstroCamp

In order to escape the gravitational field of a massive object, you need to attain a specific speed, called its escape velocity. It’s calculated using the force of gravity, taking into account the mass of the large object and how far away you are. Once something is going at minimum the escape velocity, then it is no longer captured by the massive object.

Larger objects have higher escape velocities; it would take a monstrous 133,000mph takeoff to break free of Jupiter’s gravitational pull. The sun would shut down any jump slower than 1.4 million mph!

A black hole has so much gravity that not even light, the fastest thing in the universe, can escape it. Light travels at a whopping 670,000,000 mph. As we have seen, the bigger the planet or star, the faster something has to go to overcome its gravity. So black holes must be HUGE, right? Well, sort of. 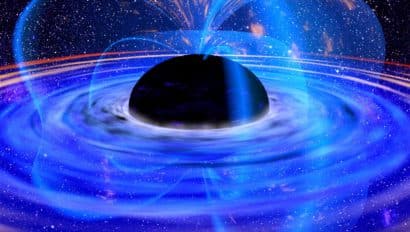 Everything you have ever seen on Earth is made out of atoms. While many people are aware that atoms are made up of protons, neutrons, and electrons, it might be more accurate to say they are made up of nothing. The most common atom in the universe is hydrogen. It is made up of one proton and one electron and is 99.9999999996% completely empty space. To think of it another way, if a hydrogen atom were the size of our planet, the proton would be just over a tenth of a mile wide, the electron would be about three inches across, and they would be separated by about 4000 miles. Most of our universe is empty!

When the most massive stars in the universe go supernova, the force of the explosion causes the core of the star to get smaller and smaller, crushing atoms and even neutrons themselves down and packing it all into a volume of 0. This point of infinite density creates such a huge bend in spacetime that it creates a singularity. At a certain distance away from this singularity, the escape velocity reaches the speed of light.As defined by the theory of relativity, nothing in the universe can go faster than the speed of light. So if the escape velocity of this object at a certain distance is higher than that, then not even light can escape the singularity. With no light escaping, the object and the space around it gives off no light. This is the black hole.

How Do We Find Black Holes?

Everything that we know about space comes from the light that galaxies and stars and other things give off. However, black holes don’t let light escape, so how do we find them? Well, there are a couple of ways. One is to wait for the black hole to get in between us and a distant object. Since gravity can bend light, this results in a phenomenon called gravitational lensing.

Most of us have experienced using a lens in some way, whether it was using glasses, cameras, or our favorite, telescopes. A lens is a piece of glass or other transparent substance with curved sides for concentrating or dispersing light rays. They have the ability to bend light! Did you know that gravity can bend light in the same way? We call this gravitational lensing; when a large massive object, like a blackhole or galaxy, passes in front of our view of a distant light source and a distant galaxy. It bends the distant light in different ways, sometimes creating two or more images or creating an Einstein ring, a complete ring of the image. Looking straight through the glass shape at the bottom of the stem of a wine glass has almost exactly the same optical properties as a massive galaxy or blackhole. 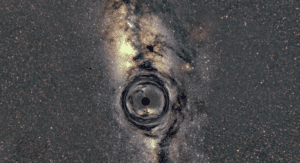 However, the black hole at the center of our galaxy was found another way: by looking at how stars in its neighborhood are moving. They whiz around in circles as if pulled by an immense central object, but we can’t see anything there. Calculating the mass needed to move the stars that fast reveals the invisible culprit: a black hole!

Why do Astronauts Float in Space?