What is light? It seems like a simple question, but many people struggle to answer it. That’s okay! The famous Albert Einstein received the Nobel prize for his work in answering that exact question. As you might expect, the answer isn’t all that simple.
Light is a part of the electromagnetic spectrum, which is made up of electromagnetic waves. As the name suggests, this means that light is made up of small changes in electric and magnetic fields, like this!

These electromagnetic waves can carry drastically varied amounts of energy. In fact, when you look at different colors, your eye is separating out the energies for you. The only difference between red and blue light is the energy of the light! To understand color as energy, let’s look at one of the most revealing properties of an electromagnetic wave: its wavelength. 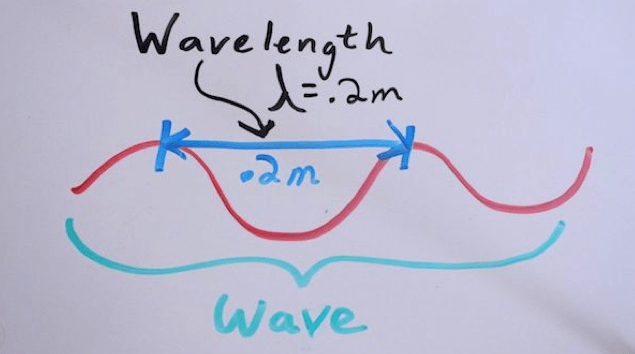 The energy of the wave depends on this factor alone. The longer the distance between the wave crests, the lower the energy of the waves. The closer together they are, the higher the energy. Across the electromagnetic spectrum, wavelengths vary tremendously, from low energy radio waves the length of a school bus to high energy gamma rays even shorter than an atom! There is nothing particularly special about visible light. It’s just another electromagnetic wave. One wavelength of visible light is about half the size of a small bacteria. That just happens to be what human eyes can detect! 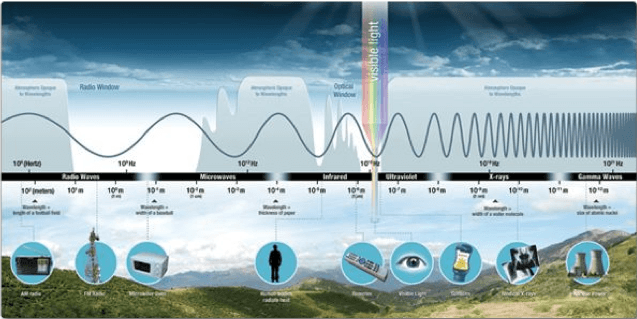 The image above shows different kinds of electromagnetic waves and their wavelengths. In gray, you can see how much of each kind of wave is blocked by the atmosphere.
Diffraction gratings are a great way to separate wavelengths. When used to filter white light, the diffraction grating splits up the different energies into a rainbow! When applied to various gases in the video, it shows a unique pattern of light for each one. Since each element produces a different pattern of light, scientists can determine what something is made of just by looking at the spectrum from that object!

This is how scientists know what the sun is made out of. It would be difficult to go retrieve a sample from the surface of the sun for fairly obvious reasons. Similarly, astronomers have been able to use this knowledge to find out what makes up other stars, galaxies, nebulae, and even other planets! Every bit of knowledge that we have about everything outside of our solar system comes directly from observing and analyzing light.