Batteries harness energy from the motion of electrons. How do we get electrons going? Chemistry! Most batteries use a simple oxidation-reduction (or redox) reaction to get electric charges moving. In a redox reaction, one material gives electrons to another. We call the donor the anode and the recipient the cathode. Strategic separation of the anode and cathode sets batteries apart from other redox reactions. Just like we can’t capture the power of the wind without putting a windmill in the way, we need to intercept the flow of electrons in a battery in order to get energy out. Completing a circuit around a battery gives electrons a path to follow and allows us to harvest power from their movement. 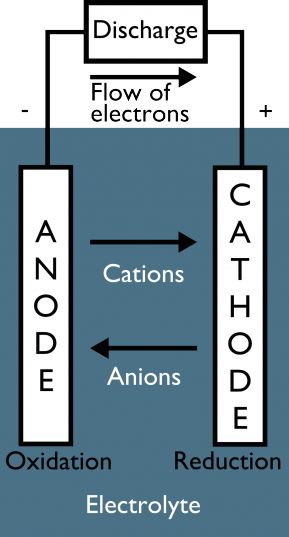 Galvanic battery. Electrons move through a wire circuit while ions flow through an  electrolyte solution between the anode and the cathode. Image credit: Simon Engelke.
In our tabletop battery, aluminum donates electrons to copper, creating positively charged aluminum ions (cations) and negatively charged copper ions (anions). If the copper anions build up at the cathode, their negative charge repels incoming electrons, and the redox reaction dies out. If we mix all the anions and cations together, their charges equalize, and electrons no longer flow. Ions on both sides of the reaction need a controlled escape path if a steady flow of electricity is to be maintained. This path is called a salt bridge, and it can be made of anything that contains ions and conducts electricity when in liquid form. Substances like these are known as electrolytes. Gatorade, Coke, lemon juice, and salt water all do the trick, although commercial batteries more commonly rely on alkaline pastes. 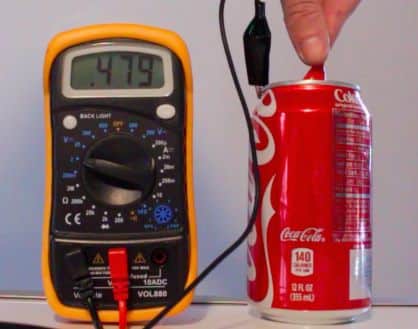 A tabletop battery with an aluminum anode and copper cathode. Electrons flow through the wires & multimeter. Ions flow through the Coke, which acts as a salt bridge.
This is an easy experiment to play with at home! A penny and a piece of a soda can make good electrodes  (buff the inside of the can with steel wool to remove the plastic coating and expose the aluminum). Experiment with produce items and non-toxic household liquids to see what works as a salt bridge. If your salt bridge is solid, like a lemon or a potato, just stick in the cathode and anode a small distance apart! When using a liquid electrolyte, hold your electrodes so that they both contact the liquid without touching each other. If you can, hook your DIY battery up to a voltmeter, ammeter, or multimeter so you can observe small electric flows, or try connecting several cells in series to light a small LED!