Electricity is everywhere! That isn’t a joke. Electricity is simply the movement of electrons. Electrons are found in atoms which make up all of the molecules in our bodies, and don’t like to stand still. Electricity can be tricky to describe and understand, but most of us have felt it in some way. Have you ever shuffled across the carpet in your socks and run over to one of your friends (or siblings!) in the hopes of giving them a tiny shock? That’s exactly what’s happening in this video!

To see what’s going on, let’s delve into the miniature world of atoms. An atom is made up of three kinds of building blocks: protons, neutrons, and electrons. In an atom, the protons and neutrons live in the center, or the nucleus. Whizzing around the nucleus are tiny electrons.
Subatomic particles interact via something called a “charge”. A charge can be either positive (+), negative (-), or neutral (0). Neutral objects don’t have a charge, and don’t interact with other charges. They just hang out. When it comes to charges, opposites attract: positive and negative charges are always pulled towards each other. When like charges get together, they repel, or push each other apart. If too many like charges gather in the same place, the repulsion is so strong that some electrons will jump away, making lightning!
Electrons are very easy to move around. They’re so tiny that you can’t see them, and almost impossibly light. In some materials with thin fibers, like textiles or human hair, the electrons aren’t very securely attached to their atoms. When a balloon is rubbed against someone’s hair or clothing (or socks on the carpet), bunches of electrons are transferred to the balloon.
Water molecules are polar, meaning they have a negative side and a positive side. When a stream of water is brought close to the electron-laden (thus negatively charged) balloon, the negative ends of the water molecules are pushed away, and their positive ends come closer to the negative charge on the balloon. What do these opposite charges do? Attract! 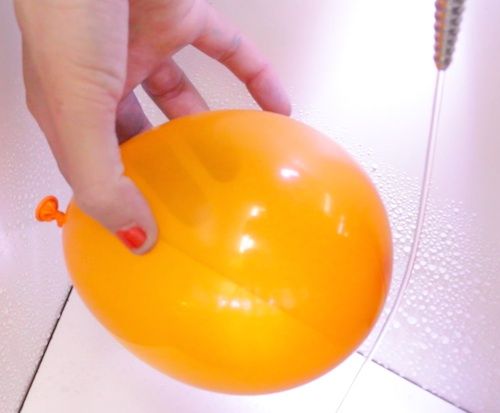