To build a tumblewing glider, start with a long, thin rectangle of paper. We experimented with gliders ranging from about three to eight inches in length and had good results with rectangles roughly 4-6 times as long as they were wide. The lighter and thinner the building material you use, the easier your glider will be to fly. Printer paper, craft tissue, and phone book pages all work well.

First, fold the short ends of the rectangle straight up away from your work surface, forming 90 degree angles with the middle of the glider, as shown in the center picture. The long edges of the glider body, between the two folded-up ends, will need to point in opposite directions, as in the picture on the right. Fold a long, thin flap towards you on one side and away from you on the other (it doesn’t matter which edge points up and which points down).

Next, check out how your glider moves through the air. Hold it by one of the long, thin folded edges and drop it with a gentle flick of the wrist. It might take a few tries to get a feel for what’s going on… don’t worry if it doesn’t seem to work right away! Ultimately, the tumblewing should rotate smoothly and quickly as it floats to the ground.
Once you’ve mastered dropping your tumblewing into a stable spin, try piloting it with a large, flat object, like a piece of cardboard. When you push a flat object through the air, air molecules move up and over it, creating a swell. The swell pushes the glider along a little bit like the water wave behind a surfer in the ocean! 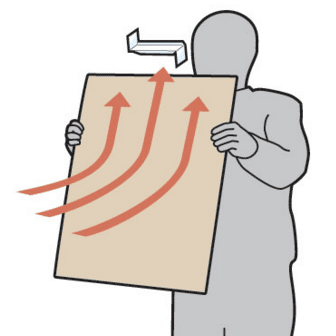 Image courtesy of Science World British Columbia
For a more challenging (and portable) piloting experience, try using smaller and smaller surfaces to push the tumblewing through the air. With enough practice, it’s possible to control a phone book paper glider using just your hands.
Our tumblewings were inspired by Science Toy Maker (http://sciencetoymaker.org/walkalong-glider-airsurf-air-surfing/). Check out their site for even more glider ideas!
Written By: Caela Barry