Did you know that our planet is a giant magnet? It’s true! Without Earth’s magnetic field, compass navigation would be impossible. The field also shields us from cosmic radiation, directing most solar wind far around our planet. In space, large objects are generally too distant from each other to be noticeably pulled or pushed by the magnetic force between them. Here on the surface of the Earth, we have the advantage of being able to bring magnetic materials close together, which makes for some awesome experimental science!
It shouldn’t surprise anyone that iron sticks to magnets. Really, that’s all this demonstration is showing us. However, crazy, alien-like slime is a little cooler than slapping a magnet on a refrigerator. It’s lots of fun to make, and it’s not too difficult! 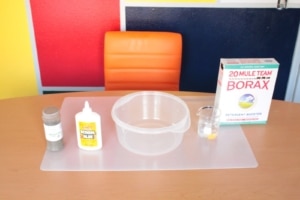 Here is what you will need to make this at home:

Start by pouring the glue into the mixing bowl. Then, to get all of the glue out of the bottle, fill it with water. Shake it a lot to mix it up, and pour that into the bowl as well. Sprinkle some iron filings into the glue and water, keeping in mind that you can always add more later. It should look something like this: 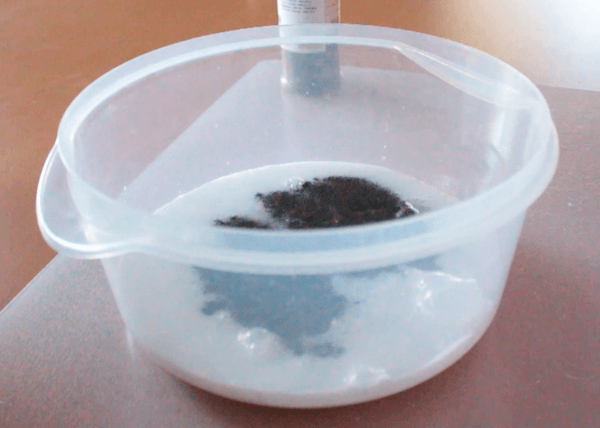 Next, fill your cup or beaker about halfway with water. Slowly add borax, stirring it in until it dissolves completely. Pour this solution into the bowl and start mixing. We started mixing with a fork, but then decided to get our hands dirty!

Stirring this mixture feels weird! It slowly clumps into squishy, almost cloth-like strips, but those strips don’t initially like to stay together. That’s okay! Keep squishing them around in the bowl. We found that in the end we had too much water or not enough patience (likely both) so we ditched the extra liquid, pulled all of the solidified bits together, and started molding them into a ball.
At this point, the magnet can be introduced. Note that neodymium magnets are very strong! They will grab anything metal tightly and suddenly. Usually, this only causes surprise, but it can lead to injury. Be careful, and keep this experiment away from all metal or otherwise magnetic objects.

Due to the bits of iron in the slime, the magnet is attracted to it. Even cooler, if the magnet and slime are placed close together and left alone, the slime will be attracted to the magnet and cover it entirely! Note that the magnetic slime attack above is sped up a lot. The slime actually takes a few minutes to completely swallow the magnet.
If this isn’t happening with your slime, try adding more iron. We did this several times. Simply sprinkle in some more iron and continue mixing it in until you can’t tell where the iron was added. Don’t be afraid to experiment. After all, this is science!
Written By: Scott Alton, Caela Barry