Earth’s gravitational force pulls on all objects equally, speeding them up with an acceleration of 32 feet per second per second. This means after one second of falling, an object will speed up to 32 feet per second, or about 22 miles per hour. After two seconds, that will double to 64 feet per second (or about 44 mph). Any object dropped near Earth WILL feel this acceleration.  However, this is only part of the story.
As an object moves through the atmosphere, it runs into trillions upon trillions of tiny obstacles– air molecules. More collisions equate to more air resistance. Something that’s light and has a large surface area in its direction of movement, like a parachute, loses a lot of speed as it plows through the atmosphere. Heavier or more streamlined objects aren’t so easily slowed down as they travel through the air. 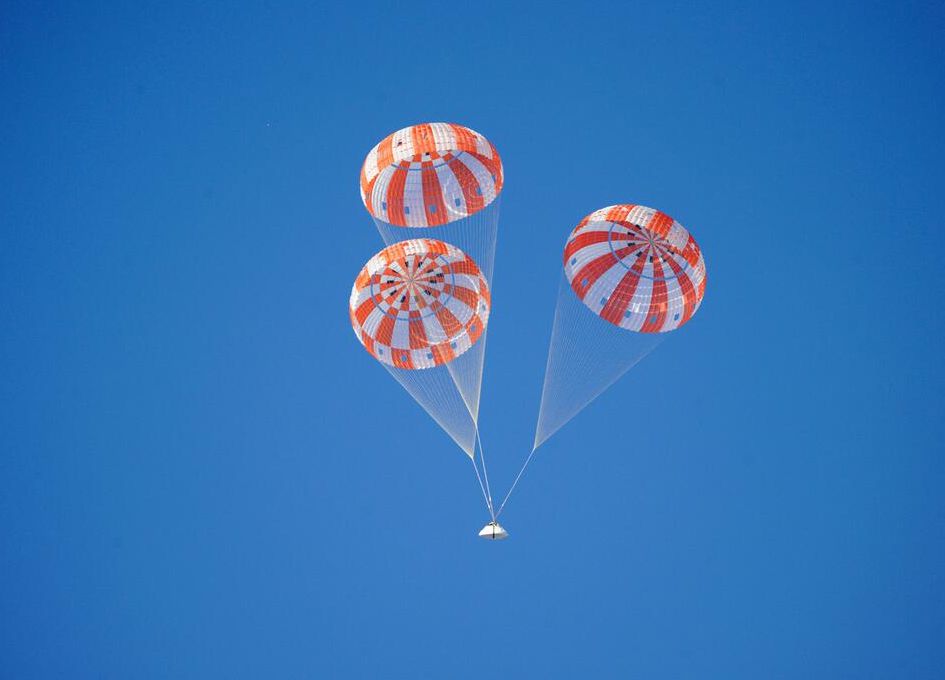 The Orion Spacecraft descends safely to a gentle splashdown landing last December under the care of three large parachutes. Photo from NASA.
A good ratio of mass to forward-moving surface area is one way to be aerodynamic. Another way to move quickly through the atmosphere is to follow close behind something that’s clearing air molecules out of the way, like one cyclist drafting another in a race.

Paper has low mass and high air resistance. Here, the book clears air molecules out of the way, so the paper falls straight to the ground at the same speed as a book! You should try this simple DIY experiment!
To see this idea in action, grab a book and a sheet of paper of about the same size. Drop them side by side and notice the difference. Both have similar air resistance, but the book’s greater mass means that it doesn’t decelerate as easily as the single sheet. Now try placing the paper on top of the book and dropping both at once. With the book clearing the way, the sheet of paper doesn’t have anything to run into, and it falls at the same rate as its heavier companion!
Apollo 15 Commander David Scott performed a similar experiment before coming home to Earth. Thanks to the moon’s extremely thin atmosphere, a hammer and a feather dropped side by side hit the ground at the same time.
Check out the full video below: