Electric generators change mechanical energy into electrical energy. An electric motor does the opposite:

it changes electrical energy into physical motion. This conversion is possible because of the Lorentz force.
Electricity is just the movement of electrons through a loop, called a circuit. Ever notice how magnets can repel or attract objects without touching them? When a circuit carries electrons near a magnet, the magnetic field pushes those electrons sideways.
The Lorentz force is strongest when the magnetic field and current-carrying wire are perpendicular to each other. Electric motors use this arrangement to turn electrical energy into mechanical motion efficiently. It’s easy to see for yourself, too! All you need is a magnetic field and a circuit that’s free to move. In today’s experiment, we’ll show the Lorentz force in action with a magnet, a battery, and a length of wire. 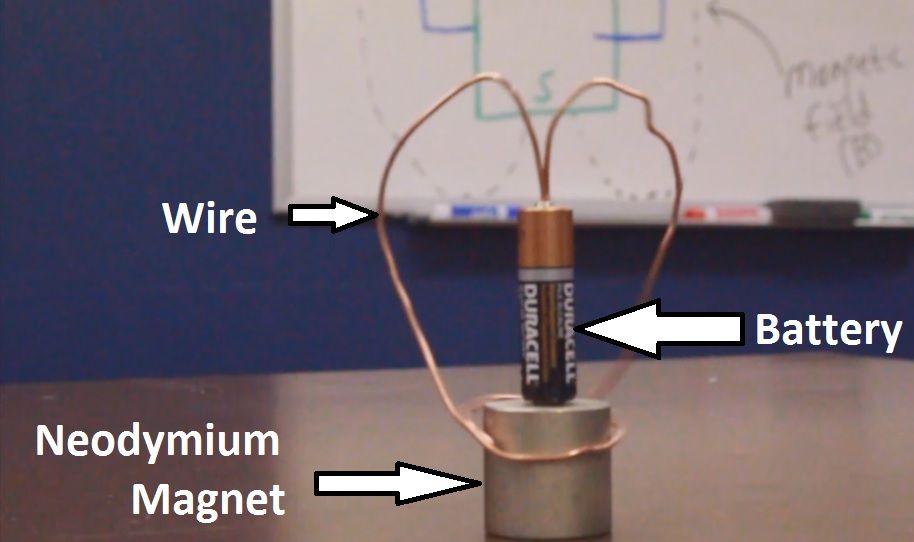 Start by setting the negative end of an AA battery on a strong magnet. Magnetic field, check; power source, check. Mold a length of wire into any shape that can balance on the positive end of the battery while also touching the magnet, completing a loop of conducting materials. Given a circuit to flow through, electrons begin to move, and voila! You’ve got a current flowing through a magnetic field. The current and the field are nearly perpendicular to each other where they intersect. The Lorentz force pushes the electrons, and the conductor they flow through, off to the side.
Shape the wire so that it can balance and spin on the positive terminal, and the electromagnetic push induces rotation for as long as the battery’s charge lasts. Electrical energy becomes physical motion. Congratulations– you’ve just created a motor!