What do egg shells, coral reefs, and human bones have in common? They’re all made of calcium carbonate! This brittle mineral compound dissolves in acid. Try submerging an egg in white vinegar (a mild acid) for 24 hours, changing the vinegar, then continuing to soak the egg for about a week. What do you observe?

The egg shell completely dissolves! This reaction between calcium carbonate and acid is a lot of fun in the lab, but it causes serious problems in the real world. Seashells, the homes of many aquatic creatures, are made of calcium carbonate, too. When excess carbon dioxide in the atmosphere diffuses into the sea, it reacts with water to form carbonic acid. Organisms made of calcium compounds slowly dissolve in its presence. 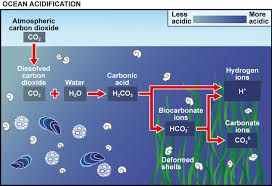 Image courtesy of www.oceanacidification.org.uk
According to NOAA research, if acidification continues to occur as projected, coral will be dissolving faster than it can regrow by the end of the 21st century. Coral is a key component of many marine ecosystems; an estimated one million ocean species depend on it as part of their habitat.
Written By: Caela Barry