The Easiest UV Detector Ever

Science is full of words to describe the glowing process. We use bioluminescence for the glimmer of plankton, phosphorescence for the slow, ghostly shine of glow-in-the-dark toys, and fluorescence for pigments that emit light while exposed to just the right energy source.

L to R: Fluorite sphere with phosphorescent coating, Don Mengason, Gemological Institute of America Inc.; bioluminescent phytoplankton on Vaadhoo Island in the Maldives, Kriss-Anne Gayle, Penn State University; mineral specimen fluorescing under UV light, James A. Van Fleet, Bucknell University.
Unless you live on a coastline rich with bioluminescence, fluorescence is the glow you’re most likely to encounter in everyday life. It’s present in white materials exposed to a blacklight and in the neon glare of highlighter ink. Tonic water appears colorless under visible light, but a distinct fluorescent glow appears when it’s bombarded with ultraviolet radiation! 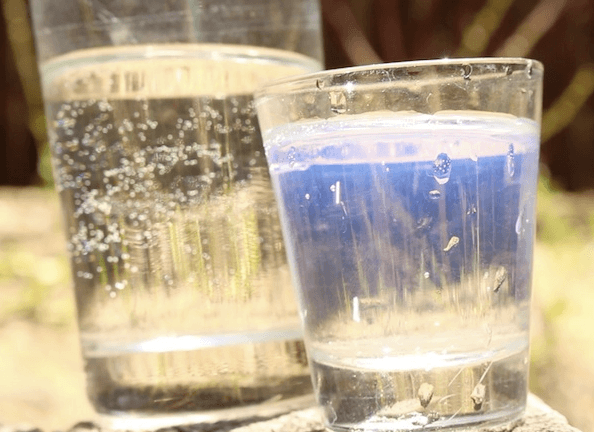 Tonic water contains a fluorescent compound called quinine. Expose quinine molecules to UV rays and they get excited, or gain energy. Excited molecules modify the absorbed light and eventually re-release it. Unlike the invisible incident radiation, the emitted glow is apparent to the human eye.

Test this idea for yourself by taking tonic water outside on a sunny day! The blue glow is more obvious when compared to a glass of tap water– consider setting one up as a control. For more intense fluorescence, up the UV radiation by exposing your experiment to a blacklight.
Written By: Caela Barry