An atom consists of three types of building blocks: protons, neutrons, and electrons. Protons and neutrons stick together in the center, or nucleus, of the atom, while electrons whiz around the outside at breakneck speed. The parts of an atom are incredibly tiny and surprisingly spread out. Let’s consider the simplest element of them all: hydrogen. Its atom contains just one proton and one electron. If the proton were two football fields across, the electron’s orbit would be about the size of the earth! Between the central proton and the faraway, speeding electron? A whole lot of empty space. 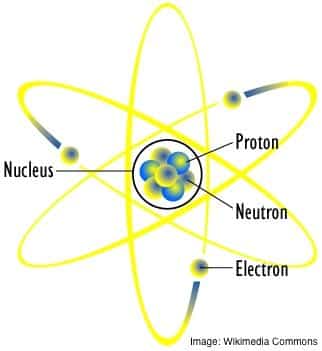 Protons are defined as having positive charge and electrons as having negative charge. Neutrons are– you guessed it– neutral. It’s a law of nature that like charges repel each other and opposites attract. Put a lot of negatively charged electrons in one place, and if they’re free to move, they’ll spread out as much as possible. Getting a lot of negatively charged particles in one place and giving them the ability to move is one common way to generate electrical power. Batteries create a surplus of electrons via a chemical reaction.
Large-scale generators get electrons moving using a different trick: electromagnetic induction. Moving magnetic fields spur charged particles into motion, creating electrical activity in wire coils. 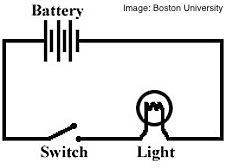 Whether the source is a battery or a generator, moving electrons don’t provide useful energy unless they have the right path to follow: a closed loop through a device to be powered, such as a light bulb or motor. This path is called a circuit. Light switches, power buttons, and outlets all provide different ways of closing a circuit so that electrons can flow.
The simplest circuit is a single loop, but in practice, it’s useful to be able to power several devices with just one source. Consider a string of lights. There are two ways to light them all at once: by linking everything together in one long chain, or by connecting the power source across each output element independently. We call the single chain approach a series circuit and the independent connection strategy a parallel circuit. Each method comes with tradeoffs in voltage and current. As you can see in the video, this affects the brightness of our two test bulbs!

These light bulbs are connected in parallel. The voltage through each one is equal to the whole voltage of the attached battery.
Written By: Caela Barry