What’s the Matter: Is Fire a Plasma?

Is fire a plasma? Turns out it’s not a trivial question! The answer depends on how you define the parameters of the fourth state of matter. Descriptions of plasma commonly include the following points: plasma is what happens when a gas is subjected to lots of ionizing energy. Although thoroughly ionized, it is quasi-neutral. Its molecules display collective dynamics and respond as a group to electromagnetic influence. 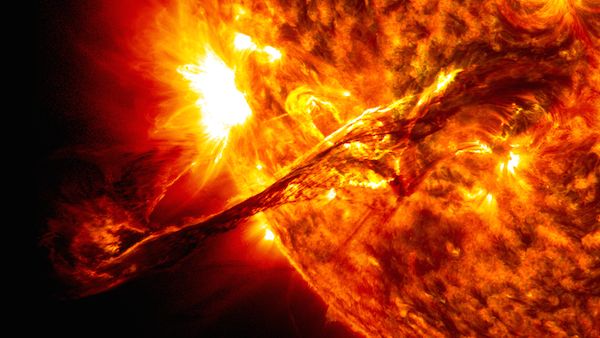 The sun as seen by NASA’s IRIS orbiter. Ultraviolet image translated into false color for human consumption. Stars, including our sun, are made of plasma.
Most of the observable universe is made up of plasma! Astrophysical plasmas are mind-blowingly hot. On Earth, too, plasma is created by copiously applying heat or otherwise energizing a gas, although plasmas can also be created in laboratory scenarios that are cold by human standards.
So, which state of matter does fire belong to? Depending on who you ask, a flame is either a low-level plasma or a lightly ionized gas. A flame is a heated volume of air in which some electrons have broken free from their nuclei, but it’s not hot enough (or ionized completely enough) to enable cohesive electrodynamic behavior on the level of, say, an arc welder.
Plasma or not, the gas within a flame contains enough ions to make it a decent electrical conductor! Here, electricity arcs from a generator to a candle flame.