Will it float? Experimenting with Density

Have you ever wondered exactly why a boat floats or why rain falls down and not up? It all has to do with density! Density is a measure of how much mass there is in a given volume, or rather how much stuff you have in a certain place. It determines whether something sinks or floats when compared to something else. 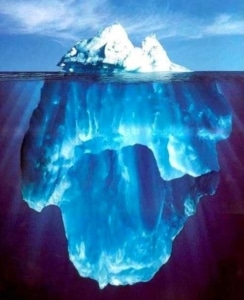 Since, we are talking about sinking and floating, let’s use the most obvious example we have, water! Water has a density of 1g/cm3. That means if anything is less dense, it will have less stuff in that same volume. A great example of that is ice which has a density of 0.9167g/cm3, which is why your ice floats in a glass of ice water. Moreover, air floats on top of water because it’s density is roughly 0.001225g/cm3.
Here are two experiments that clearly shows a difference in density. For the first experiment we will use these two silver spheres have the same mass, but very obviously different volumes. When I drop them in air, it is hard to tell the difference in densities, but when I move it to water the difference is clear! The smaller sphere has the same amount of stuff as the larger sphere, but in a smaller space, therefore it is more dense and will sink. The larger sphere floats because it’s mass is not large enough to displace the same volume of water.

Now take two cans, one of Coke and one of Diet Coke. These clearly have the same volume, but do they have the same density? It’s pretty hard to tell in air, so let’s take it to water. Drop them both in at the same time and watch what happens! The can of Coke will sink to the bottom, while the can of Diet Coke will float. So what’s the difference? A can of coke has about 39 grams of sugar which is about 10 teaspoons full. Where as a can of Diet Coke doesn’t have any. Instead, Diet Coke has an artificial sweetener in it called aspartame, that has the same amount of sweetness in it as regular Coke, but only uses as much as a few drops of it. So regular Coke will sink because it quite literally has more stuff in it.

So, things don’t float or sink due to how much they weigh, but rather it’s due to how much matter they have packed into a certain space. Can you think of other examples of things that share a characteristic but have different densities?