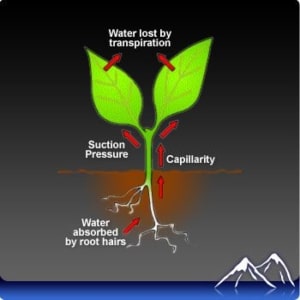 Water enters a plant at the root system and moves upwards through specialized tissue called xylem. Xylem carries water all the way to the plant’s extremities, where some escapes into the air through minute openings in the outer surface. This loss of moisture is called transpiration. In hot conditions, large trees can lose huge volumes of water, on the order of hundreds of gallons per day! (Image: UC Irvine.)
At the molecular level, water is “sticky”. It’s attracted to many surfaces, including paper, glass, and human skin. This is called adhesion. Molecules within a body of water tend to stick together, too– that’s cohesion. Tube-shaped cells in xylem tissue take advantage of a combination of adhesion and cohesion to overcome gravity and drag water upwards. 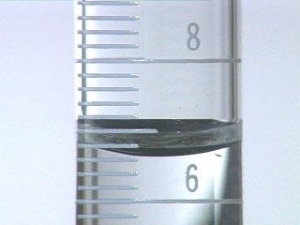 Pour water into a glass and you may notice that the liquid’s surface angles up slightly around the edges. That’s the effect of adhesion between glass and water! Thanks to cohesion, the molecules closest to the exposed glass drag their neighbors along, and the liquid climbs noticeably. Farther along the molecular chain, gravity wins out over adhesive pull, which is why water doesn’t crawl all the way up and out of most containers. (Image: East Stroudsburg University).
When the exposed surface is small enough, though, adhesion and cohesion actually beat gravity. Water naturally climbs up very tiny tubes. This is called capillary action, and it’s how water gets from roots to treetops.
See capillary action at work by sending different liquids through the xylem of a white flower. Food coloring mixed with water works well. Give this a try and see where the color ends up! For an extra-bright twist, place cut white carnations or daisies in water colored with highlighter ink. Neon pigment glows under a blacklight, so you can make fluorescent flowers!
Written By: Caela Barry