You wouldn’t want to get hit in the chest with a giant hammer…but what if you were to lie down, hold a heavy cinderblock on your chest, and have your opponent smash the block instead? Hm, actually maybe that sounds even worse!
Thanks to a law of physics, the cinderblock actually protects you! Bill Nye taught us that Inertia is a property of matter. It is also one of Newton’s laws and tells us that an object at rest remains at rest and an object in motion remains in motion, unless an outside force interferes. The more mass an object has, the more inertia it has, and the more it resists changes in speed and direction.

The cinderblock is heavy, so it has a lot of inertia compared to the sledgehammer. When the two collide, the block’s motion isn’t affected very much. This is a bit like the collision between a pebble and the windshield of a moving car. The pebble’s flight path changes dramatically, but the car’s motion is practically unaffected! The brave experimenters you see here aren’t crushed because the cinderblock just move very much. In addition, the brick has a larger surface than the hammer, which spreads out the impact. 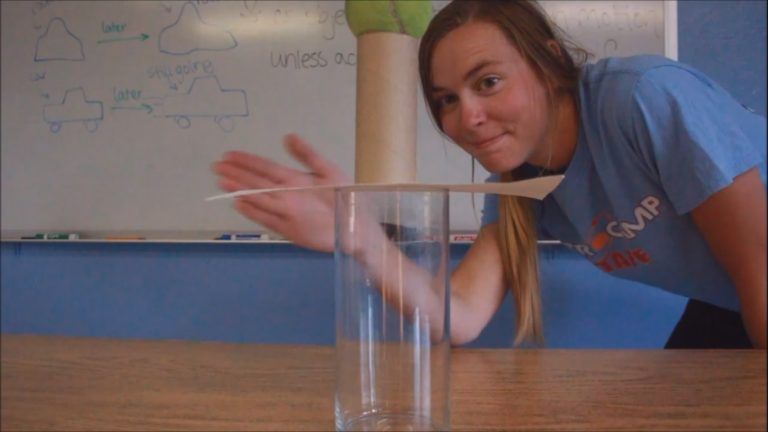 Inertia is also at play when we pull a sheet of paper out from under a tennis ball. The tennis ball remains at rest until an outside force interferes. When we pull the paper away, it exerts a frictional force, dragging the ball sideways. If we pull fast enough, that force only exists for a fraction of a second– not long enough to move the ball much. The only force remaining is gravity, so the ball falls straight down into the cup. Try it yourself!

This experiment can be scaled up to create the classic pull-the-tablecloth-out-from-under-the-dishes trick. Minimize friction with a fast pull, smooth cloth, and level surface for the most impressive effect!