It wouldn’t be surprising if nitrogen was your favorite elements. N2 is the most common molecule found in our atmosphere, making up roughly 78% of it. But here at camp, we have a different reason for why it is one of our favorite things to have around. We have a ton of liquid Nitrogen on camp and love using it to freeze things. We wanted to see what would happen when an LED (Light Emitting Diode) was submerged in the -321˚F liquid.
It turns out that something pretty cool happens… it changes colors! But why would cooling it down, taking energy away from the LED allow the color to change in a more energetic direction?

To answer that we need to know how LEDs work. They are two-lead semiconductor light sources that emit light when activated. When a suitable voltage is applied to the leads, electrons are able to recombine with electron holes on a positive or negative band within the device, releasing energy in the form of photons. 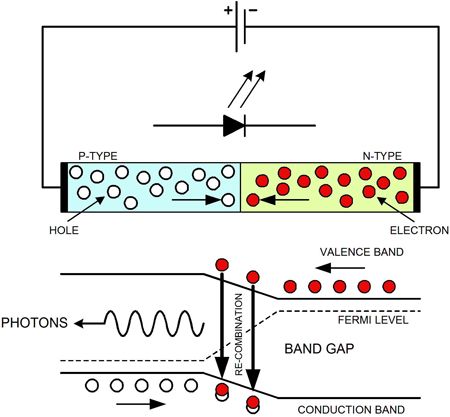 When an atom is at rest it’s electrons are at the lowest energy state possible. With LEDs, an electron is shot in, hits another electron which increases its energy, hopping up to the opposite band. When it starts to rest enough, it falls, giving off a photon (light particle). The bigger the hop in energy state, the greater the fall will be, and therefore the more energetic the photon will be.