Where Do Stars Come From?

Where do stars come from? The short answer is: gravity. All objects with mass experience gravitational attraction to each other. That includes you & the Earth, you & me, every person on our planet, and every star in the cosmos. So, why aren’t we pulled in all directions? Gravity depends on two things: mass and distance. The bigger an object is, the stronger its influence. The farther it is from you, the less you’re affected by its pull. Stars have plenty of mass, but they’re so far away that their gravitational effect on us is negligible. You and I could stand next to each other, but we just aren’t massive enough to pull significantly on each other compared to the much stronger attractive force Earth exerts on our bodies. 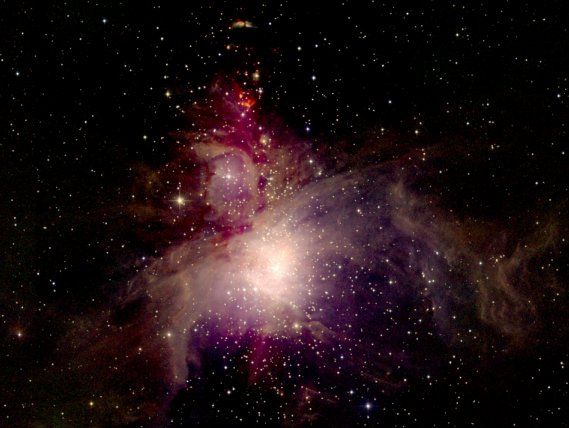 The Great Orion Nebula, visible to the naked eye as part of Orion’s dagger, is a massive space-cloud system and a productive stellar nursery. Image credit: UMass/2MASS/IPAC
In deep space, it’s a different story. In the absence of larger gravitational influences, even dust particles pull each other closer. It’s this quiet, dark, and delicate dance that gives rise to the stars we see in the night sky. Nebulae are massive space clouds of gas and dust. Within these clouds, turbulence makes some areas denser than others. When a dense knot of dust reaches critical mass, it collapses under its own gravitational pull, heating up and becoming a protostar. This spinning collection of hot, dense debris drags nearby particles along with its rotation, and an embryonic solar system is formed.
Einstein’s theory of relativity describes spacetime as a three-dimensional fabric that can be stretched in a fourth dimension. The way that massive objects stretch the fabric of spacetime explains their gravitational pull on each other. That’s tough to visualize, but a two-dimensional model that stretches in 3D helps us to wrap our heads around the idea.

Particles of water vapor model the behavior of dust in a nebula.
When we place a heavy sphere in the center of a sheet of stretchy fabric, it pulls the surface down. Drop marbles or BBs onto the fabric and they spiral around and around before coming to rest at the lowest point. The same thing happens with water vapor: it spirals to the spot where the gravitational potential is lowest– the heavy object in the middle.
This model of spacetime provides a simple, fairly accurate illustration of the way individual stars form in nebulae.
Written By: Caela Barry