You Are Here: Our Place In Space

Spend a clear night outside and you might notice something strange about the sky: the stars migrate from horizon to horizon. It’s not quite as obvious as the sun’s motion, but it’s true. Our home star isn’t the only one that appears to rise in the east and set in the west. 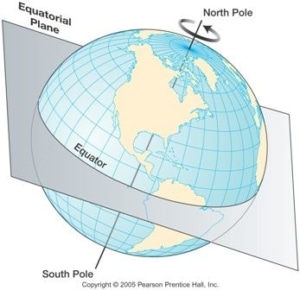 Image credit: Pearson Prentice Hall, Inc. 2005.
The illusion that everything outside our atmosphere orbits around us results from our planet’s own spin. Only the points along our axis of rotation, the imaginary skewer Earth spins on, seem to stand still. It just so happens that a star lies on this line! Polaris gets its name because of its strange behavior. Unlike other lights in the sky, the North Star can always be found in the same place. As for other stars, the closer they are to our axis of rotation, the smaller the circles they seem to trace. 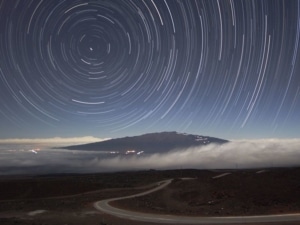 Polaris appears to stand still because it’s located along Earth’s axis of rotation. The farther a star is from that axis, the larger the circular path it appears to take from our perspective. Image credit: Peter Michaud (Gemini Observatory), AURA, NSF
Stargazing cultures throughout history have noticed this hierarchy of motion and canonized it along with the constellations themselves. One Greek myth places self-centered queen Cassiopeia in the sky near Polaris, where she’s doomed to dip her head in the ocean year after year, never fully disappearing below the horizon. She’s a circumpolar constellation, one that circles Polaris closely. Farther from Earth’s axis of the rotation, tracing more generous loops in the sky, Cygnus the swan dives in and out of sight with the seasons, nobly trying to rescue a drowned friend.

Dark summer skies treat stargazers to one of the most striking sights to slice through the night: the main belt of the Milky Way Galaxy itself.
It’s a grand cosmic coincidence that there’s anything visible along our rotational axis at all. The night sky is mostly empty space. A typical star apparent to the naked eye has an angular diameter in the ballpark of 0.01 arc-seconds. In the whole world, the average human eye can detect 9,096 individual stars. This means that resolvable stars take up less than one millionth of one percent of our view of the universe. It’s astonishing that a stellar signpost happens to hang out in one of the two spots that don’t seem to move. What’s more, the North Star hasn’t always held its convenient position, and it won’t stay there forever. Our axis of rotation moves slowly over time. As it moves, it points to different patches of sky. Luckily for humanity in the Northern hemisphere, the axis has pointed to a guiding star through the time in history when we’ve learned to navigate.
Written By: Caela Barry