Woohooo! Science is fun! What you just saw is a classic demonstration of something called Conservation of Angular Momentum. This concept can be difficult to grasp, and is certainly a mouthful. Let’s break it down and see if we can understand what is happening!

A good place to start is the last word. Momentum is a mathematical quantity (technically it’s a vector) that can be calculated by multiplying something’s mass by its speed. Something that is heavy and fast has more momentum than something heavy and slow, light and fast, or especially light and slow.
Angular momentum is just momentum in a circle. This can be calculated by multiplying the momentum by its distance from the center of the circle that it is traveling in, or the radius. This is a little harder to understand, but if two things have the same momentum, the one that is traveling in a bigger circle will have the larger angular momentum. If two objects are at the same radius, the one that has the larger momentum has a larger angular momentum.

Why do we care? Mostly because angular momentum is a conserved quantity. You may have heard of Conservation of Energy before, a principle that simply states that energy can not be created nor destroyed. Conservation of Angular Momentum works the same way, and as we saw that it is basically mass tim es velocity times radius. Since mass isn’t something that we see appear or disappear very often, this really only means two things can change: its speed and the size of its circle.
The total amount of angular momentum has to stay the same. That’s the conservation part. So if you have something at a large radius and bring it closer, the speed has to go up to compensate. There are several good real life ways to see this. Watch the beginning and the end of a game of tetherball, and you should notice a dramatic difference. Similarly, figure skaters often go into dizzying routines where they bring their arms in and start to spin faster and faster!

This same thing can happen on a cosmic scale. One cool example is in our solar system. Jupiter is well known for being the biggest planet, but it also has the shortest day at just under 10 hours long! Jupiter formed from a huge gas cloud that was slowly spinning. As it collapsed into a planet, it had to spin faster because of conservation of angular momentum! Even cooler: this process is still happening. Even as we speak, Jupiter is still shrinking at a rate of about 2 cm per year, which isn’t a lot…but still means that the planet is speeding up!
The animation on the left shows a star forming by a similar process. Credit Matthew Bate
There is another much more exotic example: Neutron stars! We have written about these before, which you can read here. In short, neutron stars form when stars much larger than our sun explode and leave a collapsed core behind. These neutron stars are only about 10 miles in diameter; a stark contrast with our sun’s 800,000 mile diameter. Stars spin too, and you can probably see where this is going. Even though the sun rotates just over once a month, conservation of momentum would demand that it spin faster if it were to shrink in such dramatic fashion. As a result, slow neutron stars spin about once every 8 seconds. Fast ones, known as pulsars, can spin around at over 700 times per second! Just be glad that doesn’t happen in the chair! 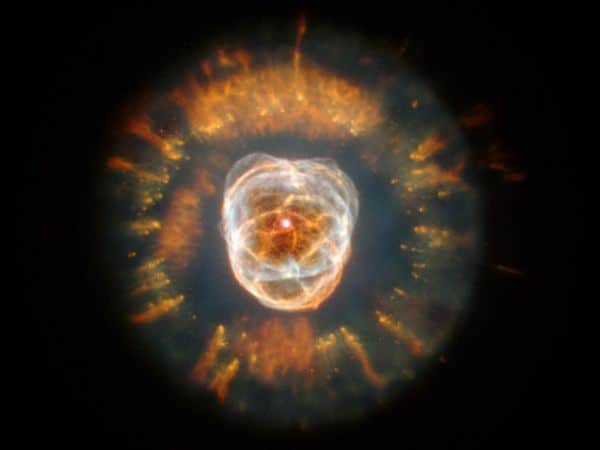 Neutron stars don’t look like much, but usually reside within these cool molecular clouds that were part of their stellar outer layers during their previous phases. Credit NASA/ESA/HST