If you’d like to know what’s out there in the universe, it’s an awfully exciting century to be alive! From Vostok to Hubble to New Horizons, ambitious feats of engineering are bringing our corner of the cosmos into fuller detail and color all the time. At AstroCamp, we’re all about harnessing the wonder of space exploration as fuel for passion and inquiry. We hope that some of the students who peer through our telescopes into the deep, dark beyond will keep looking and pushing the boundaries of human knowledge as part of the next generation of scientists.

Space matters because it stimulates curiosity, drives innovation, and lends context to our existence on Earth. It matters because it changes our perspective on everything. In honor of NASA’s anniversary, here are a few mind-bending ideas that show #whyspacematters to us.

Look up at the night sky. You are experiencing a tiny gravitational pull from every star and planet you see, and hundreds of billions that you don’t see. Even weirder, your body is pulling back on each one! If you replaced the sun with a black hole of the same mass, Earth’s orbit wouldn’t change, but 8.3 minutes later we’d get very, very cold. That’s the amount of time it would take for the sun’s last light to reach Earth. 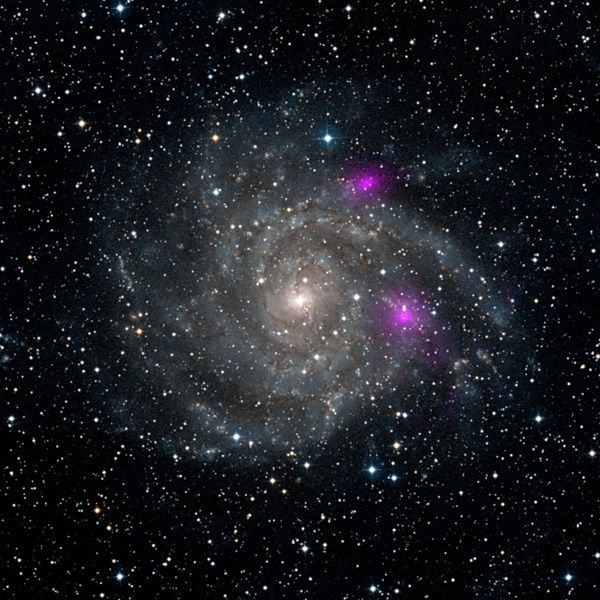 Two black holes (shown in purple) in spiral galaxy Caldwell 5. Credit: NASA/JPL-Caltech/DSS
When you look out into space, you’re also looking back in time. The average distance to a star you can see with the naked eye is in the ballpark of 100 light-years. This means the image your eyes receive is about 100 years old. The closest star to earth is 4.22 light-years away. If it mysteriously disappeared right this second, we’d have no idea until 2019! The Milky Way and its nearest neighbor, the Andromeda Galaxy, are on course to collide in roughly 4 billion years, as our sun nears the end of its life. Galaxies are mostly empty space, so the odds of things actually smashing into each other are remote, but any life forms present at that time will witness a complete transformation of the night sky. 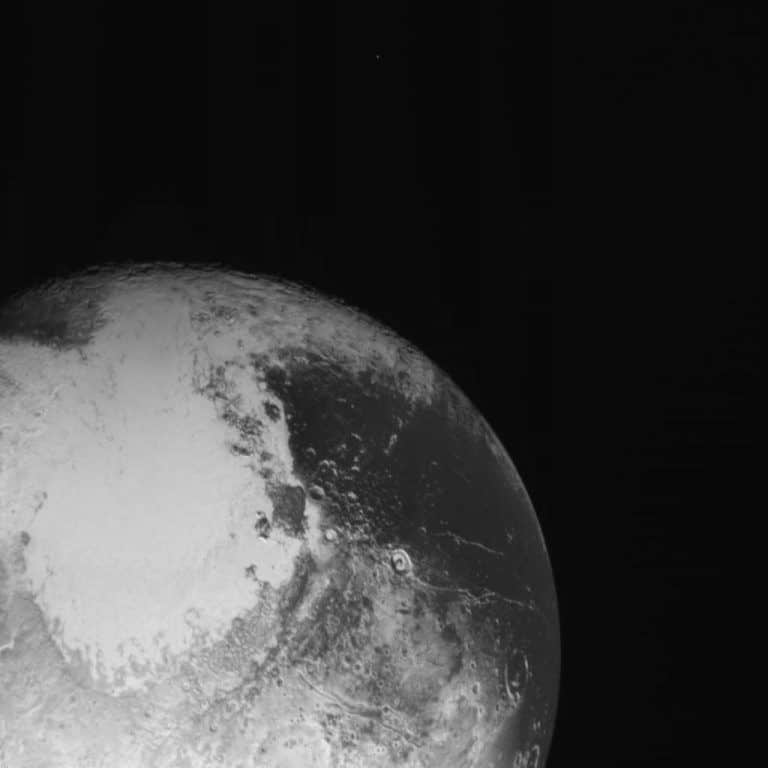 New Horizons LORRI image of Pluto, 7/14/2015. Credit: NASA/Johns Hopkins University Applied Physics Laboratory/Southwest Research Institute
Over 70 years ago, within the memory of many people alive today, no spacecraft had ever left our home planet. As of this writing, 533 people have orbited Earth. 12 have walked on the moon. A telescope the size of a school bus floats in space, probing the history of the universe. Robots study nearby worlds on our behalf. Voyager 1, which has been sailing towards the distant stars since 1977, is now three times as far from the sun as Pluto, over 12 billion miles away from Earth… and counting!
Happy Anniversary NASA! Here’s to the bright future of exploring the great unknown.