January 19, 2006. A piano-sized robot blasts upwards from Earth on a massive rocket and escapes the gravity of our home planet, bound for distant adventures. For a small community of scientists, launch day kicks off the long closing chapter of a story years in the making. To most of the world, it’s the beginning of the New Horizons saga. Nearly a decade of spaceflight later, the brave little probe has earned name recognition in households around the world. Its iconic images and data are the product of its payload. On board, seven cleverly designed experiments work together to gather new science and send it home.
Meet the mechanical and digital brains of New Horizons: Ralph, Alice, REX, LORRI, SWAP, PEPSSI, and the Student Dust Counter (SDC for short, designed and built by actual undergrads)!
Let’s start with their jobs. Together, the seven instruments tackle three primary goals:

That’s right, Pluto’s atmosphere is escaping! It’s blowing away in the solar wind, and at an astounding rate. It turns out that the dwarf planet and its dynamic atmosphere look almost like a giant comet. 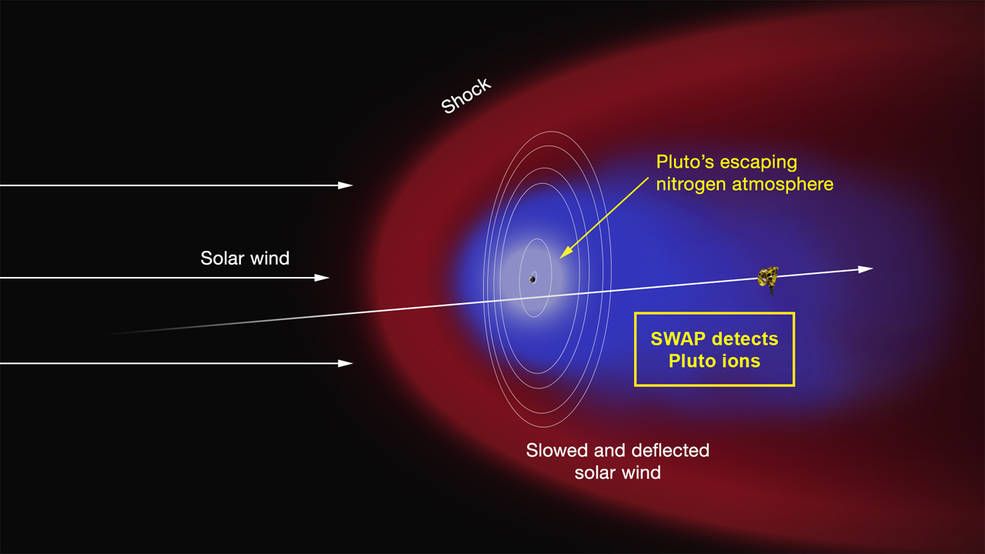 Source: http://pluto.jhuapl.edu/News-Center/News-Article.php?page=20150717-2
This phenomenon is Alice, SWAP, and PEPSSI’s territory. (REX also studies atmospheric science, but is busy figuring out what’s happening down low, near the surface.) Alice, a spectrometer, is in charge of detecting UV rays and figuring out how much of which gases are present in Pluto’s upper atmosphere. SWAP specializes in measuring the solar wind that’s blasting the dwarf planet’s “air” out into space. SWAP’s data, combined with PEPSSI’s analysis of the escaping atmosphere, define the size and shape of the lopsided nitrogen cloud around Pluto, shown as a blue shell in the image above.
Intriguing as the case of the runaway atmosphere may be, it’s not, of course, the biggest thing to come out of the Pluto flyby (which, by the way, occurred at 30,000 mph, over 17 times faster than the average bullet). New Horizons has filled a significant gap in the common consciousness by taking our best image of the former ninth planet from a tantalizing but blurry hint to a gorgeous, high-res map…one with a prominent familiar feature, no less! 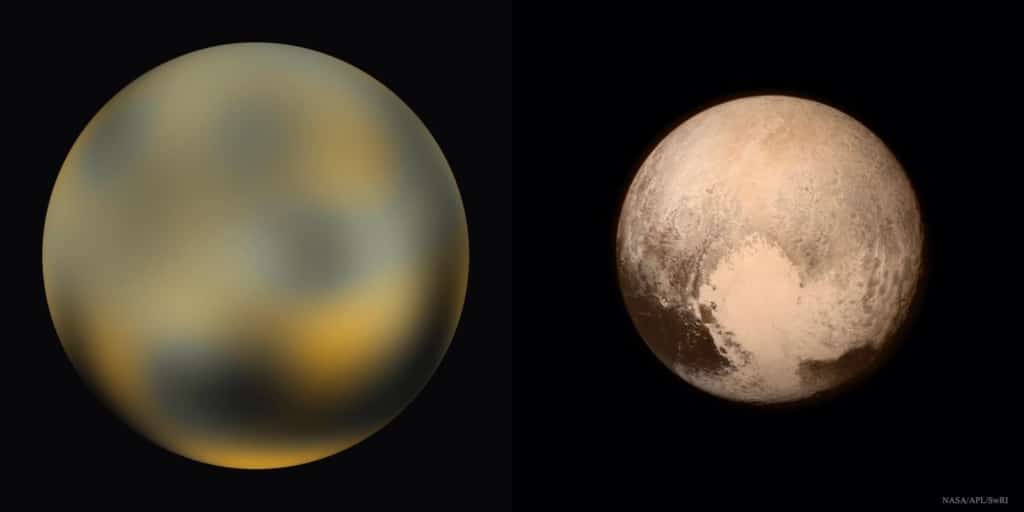 Sources: http://news.nationalgeographic.com/2015/07/150714-pluto-flyby-new-horizons-space-planets/#, http://apod.nasa.gov/apod/image/1507/Pluto04_NewHorizons_1042.jpg
The exquisitely detailed world on the right is brought to you by LORRI. This telescopic camera gives us such a nice view of Pluto that we can see features as small as 100m across on its surface. LORRI’s partner in science, a spectrometer named Ralph, reads visible and invisible light emitted by Pluto and Charon. The readings tell scientists on Earth about the composition and climate of these distant worlds. We now know, for instance, that much of Pluto is wrapped in a shell of frozen methane and nitrogen!
Each of these experiments is making invaluable contributions to a new foundation of knowledge about the former ninth planet and its cosmic neighborhood. There’s something special, however, about the last instrument aboard New Horizons. It’s been designed and built by students! Young scientists are taking part in the exploration of space– and they’re returning important results.

The SDC is all about counting dust. That’s right, dust. Each time a particle hits one of its detectors, a small electric signal registers. Unglamorous as it may sound, space dust is key to understanding both the past and the future of planetary formation. The distribution of debris in our solar system– the way the particles have arranged themselves over the course of the sun’s life– can tell us a lot about how our world and its neighbors came to be. Our sun gives us a home-court advantage; it’s more difficult to study the history of distant planetary systems. Once we have a deeper understanding of our own corner of space, we’ll be better prepared to analyze similar information gathered from light-years away.
As of this writing, all seven experiments are just over 3 billion miles away and receding into the Kuiper Belt at tens of thousands of miles per hour. Next up: a demystifying flyby of another KBO (Kuiper Belt Object), to be chosen and targeted in 2016. We can’t wait to see what New Horizons sends home this time!