What’s So Special about the North Star?

The most famous star in the night sky is undoubtedly the North Star, also known as Polaris. It isn’t the brightest or most spectacular looking star, but it is nevertheless very important. Let’s take a look at why!
The image above shows the north star in the Idyllwild sky. As we know, the Earth is spinning. This is what causes the sun to rise and set and the stars to move across the sky. It is also tilted,  which gives us our seasons. If we were to draw a line through the axis that the Earth spins around, and then extend it over 300 light years past the North Pole, it would go right to the North Star! 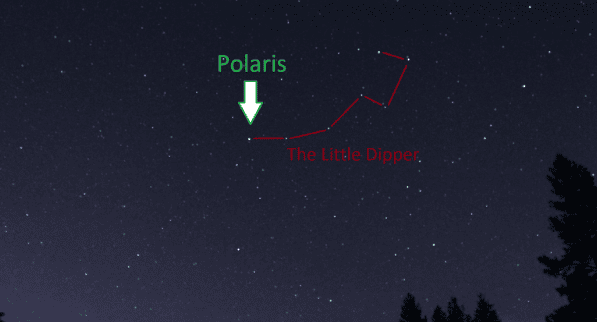 The motion of stars around Polaris from AstroCamp. Careful examination reveals that the North Star does move a tiny bit over the course of a night!
Because of this, it stays almost exactly in that spot in the sky all  night and all day, and thanks to its perch high above the North Pole, it always points the way North! This is really important for navigation, especially in the days before GPS devices, but it gets better!  If you were standing on the equator, Polaris would appear to be right at the horizon. From the North Pole, it would appear to be straight overhead. This means that using its height in the sky can do more than just point out the direction, it can also tell you where you are on the Earth!

This shows how to find your location on the surface of the Earth using the position of Polaris. Image Credit: Fort Worth Astronomical Society

Interestingly enough, there isn’t a “South Star” because just by chance, there isn’t a bright enough star right above the South Pole! However, that won’t necessarily be like that forever! When a top spins on a tabletop, the end of it will move in a circle. This is known as precession. The Earth is basically a giant top in space, and it behaves the same way! This means that the North and South Poles won’t always point towards to the same spot in the sky! Over the course of 26,000 years, this will cause the North Star to change from Polaris to several other stars and back again.

The Precession of Earth’s axis will cause the North Star to change from Polaris to other stars over the course of 26,000 years. Image credit: Wikipedia user Tfr000
Written By: Scott Alton