Today is National Paperclip Day! Yes, even those simple bits of bent wire have their very own day. Being a science camp, we decided to celebrate in the only way that made sense: Paperclip science!
Lets start with a simple question. How can you tell if something will float? The most common and simple answer is density. Density measures how heavy something for a certain volume of it. It can be a little tricky to think about, so to make it simple, consider a two liter soda bottle. If we fill it with water, it will weigh two kilograms (about 4.4 pounds). Any substance that would make the bottle heavier than that will sink, and anything lighter will float. Paperclips are made of steel wire. If we filled the bottle with steel, it would weight a little north of 15 kilograms (or just over 34 pounds!). Paperclips should not float!

These two metal spheres have the same mass, but very different volumes, resulting in very different densities. The larger one is hollow.
But we see them floating at the top of the water when carefully placed. As Eric mentioned in the video, this has to do with surface tension. We talked a fair amount about surface tension in our Teacher Appreciation Day post. For a more in depth discussion of this, check out that post here. In short, water molecules hold onto each other tightly. Its what pulls water into droplets, allows you to slightly overfill a glass of water, or pile drops of water on a penny.

Water on a penny. The last drop is just too much for the surface tension to hold.
When the paperclip is carefully placed on the water, the surface tension bends and cradles it. The paperclip is still made out of steel, so it still should sink if you think about its density. However, there is another way to think about buoyancy. It’s called Archimedes’ Principle and has to do with displacement.
If you have a full bathtub, and then you get in it, the water will spill over the rim. This is displacement. When something goes into the water, it moves this water out of the way. The water doesn’t compress. Instead, it is lifted up. When you put something in the water, the force pushing up on it is the weight of the water that it pushed out of the way.

The less dense ball, when pushed underwater, displaces a mass of water greater than its own. Since buoyancy is stronger than gravity for this object, it is launched out into the air!
This fits perfectly with the density explanation as well. If we put the bottle of steel in the water from before, it will displace 2 kilograms of water, but weigh over 15 kilograms! As it weighs much more than the water it is displacing, it will sink. 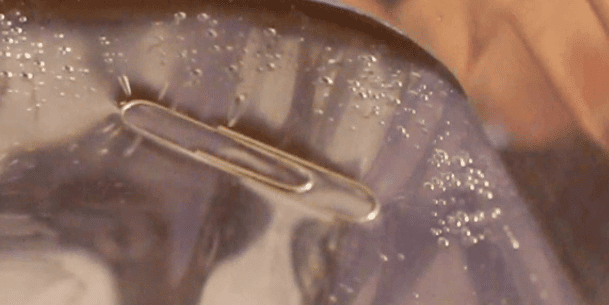 However, the surface tension changes things for the paperclip. Above is a picture from beneath the floating paper clips. This is also how water striders walk on the water. The water bends, and displaces more water than the paperclip normally would. 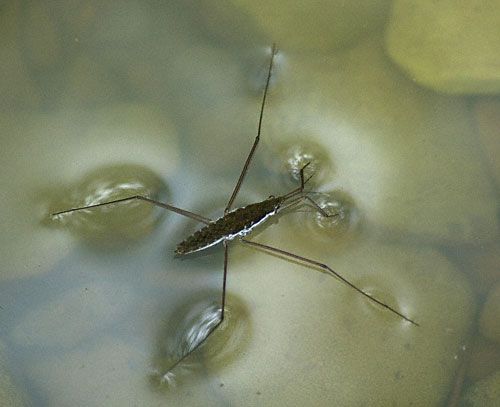 This same phenomenon is what causes this to happen when soap is added to some milk and food coloring!