The universe is full of action at a distance. Planets and stars tug on each other via the gravitational force. Magnets attract or repel based on their polar orientation. An object’s area of influence is called its field. Gravity, electricity, and magnetism are some of the most common field interactions.

The plasma ball’s central electrode transmits an electromagnetic field that extends far beyond its glass shell. Need proof? Try holding a fluorescent light tube nearby. The field generates electricity by setting electrons in motion, lighting the bulb!
Inside the globe is a miniature atmosphere of noble gases. These are less dense than air and ionize at relatively low voltages. At the core of this noble cloud, a high-frequency oscillating current creates a large buildup of negative charge. Like charges repel each other, so the buildup discharges outward in lightning-like plasma filaments.

Plasma is the most abundant state of matter in the cosmos. Solids, liquids, and gases are more familiar on Earth, but in the big picture, plasma is everywhere! It’s what stars are made of, and stars comprise most of the known mass in the universe. So, what is this stuff? 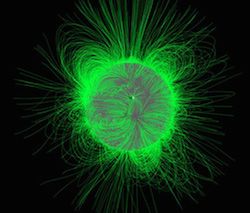 Adding energy to a solid weakens the attachments between its molecules, so it melts into a liquid. Add even more energy, and the molecules detach completely– that’s a gas. Plasma is what happens when a gas becomes so highly energized that electrons actually separate from their respective atoms, creating an electromagnetic fluid.
Bring gravity and rotational dynamics into the mix, and some crazy field patterns emerge. The NASA image at right shows the sun’s magnetic field lines. This behavior is the source of stellar weather like sunspots and solar flares, which have measurable effects on GPS and other systems. Large coronal mass ejection events can even blow out power grid transformers on Earth! Aerospace engineers, pilots, and electrical companies get forecasts from the NOAA Space Weather Prediction Center just like most of us check the weather at home.
Written By: Caela Barry