The Science of Depth Charges

Imagine hitting a hanging punching bag. A significant part of the impact travels through the bag, causing it to swing back and forth. Now replace the punching bag with a down pillow. This softer, less dense target absorbs most of the shock instead of transmitting it. The pillow swings a little, but deforms a lot.

The punching bag and the pillow illustrate the effects of pressure waves in water and air, respectively. Air is relatively squishy. Its molecules have some wiggle room, so it compresses and decompresses with ease. Water molecules, on the other hand, are packed together so closely that water is often called incompressible. Like the swinging punching bag, water moves with a pressure wave instead of attenuating it.
Above: the effect of a depth charge on a nearby ship. As the pressure wave travels through the hull, the ship flexes back and forth, weakening its structural components. Image credit: Naval Postgraduate School
If you’ve ever tried to run or throw a ball underwater, you’ve probably noticed that liquid creates a lot of drag on moving objects. Submerged shrapnel doesn’t travel far for exactly this reason. The primary danger from a depth charge explosion is the pressure wave itself, not the bits of debris it throws around. In World Wars I and II, naval ships detonated bombs near submarines to compromise their structural integrity and key instruments. Initial blast damage was rarely fatal, but the power of the underwater pressure wave was debilitating enough to force targets to surface, opening them to direct fire. 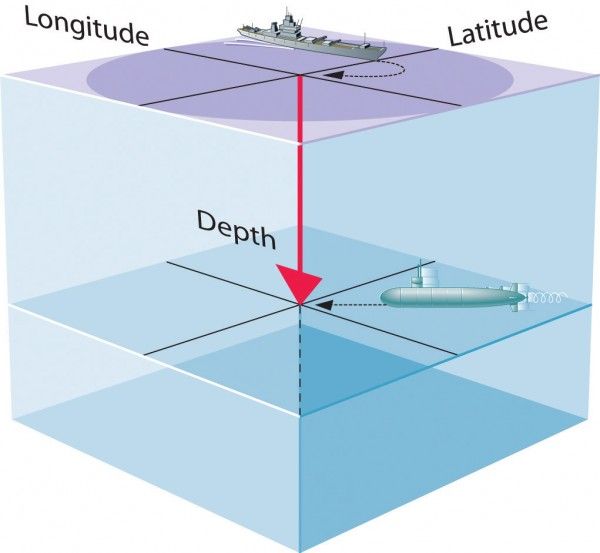 A person unlucky enough to be outside a submersible in the range of a depth charge would experience another gruesome difference between blast physics on land and underwater. Humans are denser than Earth’s atmosphere, so in air, pressure waves primarily bounce off of us. The pressure differential still has unpleasant effects on air pockets such as inner ears, but most of our body parts are safe from implosion. Humans and water, though, have similar densities. This means that an underwater pressure wave passes through a submerged person, causing catastrophic damage to vital organs. Image credit: UC Davis
Destructive as weaponized depth charges can be, mini versions are a lot of fun to play with (carefully) in the lab. Our submersible explosive is simple: a small amount of solid carbon dioxide and water are trapped inside of a film canister. You may also see pennies in the video. These were used to weigh down the canister, but did not otherwise contribute to the result. As the carbon dioxide sublimates (goes from solid to gas), it expands rapidly, popping the top off the container. This tabletop explosion is cool in air, but even more dramatic underwater, where the blast radius is clearly visible! Science is awesome!