With things heating up this summer, we wanted to just play in the snow! The stuff you just saw is called sodium polyacrylate. It is also known as waterlock, which shouldn’t be surprising considering what you just witnessed! Its ability to absorb an incredible amount of water makes it useful for certain purposes–like diapers and thickening agents–but it can also make for a super fun science project!. 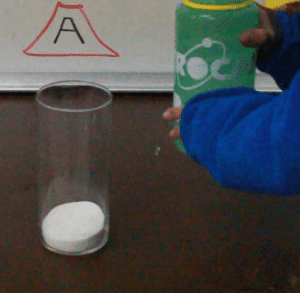 Even  after absorbing all of that, the snowy substance felt damp, but still could have absorbed more! Sodium polyacrylate has been called a super absorber for the fact that it has been known to absorb up to 300 times its own mass!
An interesting chemistry note: adding salt to the water and snow mix changes the properties of sodium polyacrylate immensely. Check it out below as the salk breaks down the mixture, resulting in truly wintery pile of wet, sloppy slush.

Enjoy your summer while you can!