Believe it or not, supernovas have been known to humans for thousands of years. That’s not to say that ancient civilizations knew exactly what was happening when they saw them, but they were witnesses to some of the most powerful events in our universe. When certain stars reach the end of their lifetime, they explode in a spectacular way. These stars are most commonly very large, anywhere from a few times as massive as our sun to a few hundred times as large. These supernovas emit an incredible amount of light, the brightest of which can be billions of times more luminous than our sun. 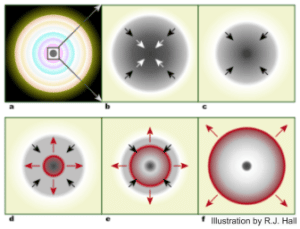 However, these explosions occur fairly rarely. Scientists believe that only a handful happen in the Milky Way every thousand years. But when they do, they are bright enough to be seen from Earth. In the year 1054, Chinese astronomers observed a new star near the constellation of Taurus. It quickly grew, until it appeared even brighter than the planets in our solar system. This visitor star lasted for about two years, eventually dimming until it could no longer be seen. 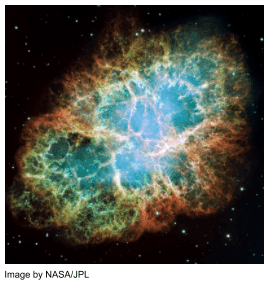 In the 1700s, astronomer John Bevis discovered the Crab Nebula in the Taurus constellation, and it was later recorded by Charles Messier as the first object in his 110-object catalogue. Two hundred years later in 1928, another astronomer named Edwin Hubble connected the records of the Chinese astronomers and the object known as the Crab Nebula to be the same thing, separated by almost a thousand years. His theory was that the nebula was the remnants of a supernova, which was the source of the visitor star.
This turned out to be correct, and later it was determined that at the center of the nebula was a pulsar – a very quickly spinning neutron star left over by the explosion. This revelation led to the discovery of dozens of other supernova remnants. Over the past few decades, research into supernovas has greatly expanded our knowledge of astronomy and stellar evolution. We haven’t seen a supernova in our galaxy for a long time, and we’re due one in the near future. Astronomers have identified several stellar candidates that may explode sometime soon – and when one of them does, we’ll get to experience another visitor star for the first time in hundreds of years.
Written by Scott Yarbrough