Ever cover the end of a garden hose with your thumb to turn it into a long-range water blaster? The same thing happens when wind is squeezed between mountain ranges. This is called the Venturi effect, and it’s how wind engineers make the most of their turbine placements. California’s desert valleys are home to America’s oldest wind farms because they function as natural wind tunnels.

The San Gorgonio Pass wind farm, just down the mountain from Astrocamp, is one of the oldest in the United States. Its operational capacity is 615MW. For more on how a windmill actually produces electricity, click here! Photo credit: Gregg M. Erickson.
Wind energy has seen massive expansion since it first gained traction in the 1980s, and it continues to grow. In 2014, U.S. wind farms generated over 180 million kilowatt-hours of electricity. That’s enough to power about 15% of domestic households. A recent Harvard study indicates that establishing a widespread turbine network across the central plains of the U.S. would power the nation many times over. Taking hydropower and other forms of electrical generation into account, Europe and China produce comparable levels of renewable energy, and many other regions are in hot pursuit.

Global renewable electricity production by region, historical and projected. Source: International Energy Agency.
Many of the engineers who will propel the world into a more sustainable future are training in today’s elementary classrooms. The skills they’ll need as future problem-solvers can and should be learned now. AstroCamp’s newest curriculum offering encourages young people to practice the engineering cycle in an environment that balances collaboration, friendly competition, and real-world relevance. 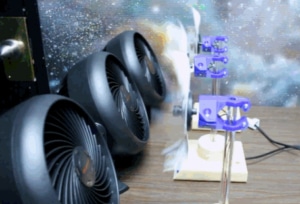 Their goal: Create, through several iterations of design and testing, a turbine to maximize power production from a model wind source, then team up with classmates to power a LEGO skyscraper!