Who is Daniel Bernoulli?

Daniel Bernoulli was a Swiss mathematician and physicist in the mid-1700s. He excelled in the fields of statistics and probability, but also was influential in applying mathematics to physical mechanics. Particularly, he is known for his work in fluid dynamics, now known as Bernoulli’s Principle.

What is Bernoulli’s Principle? 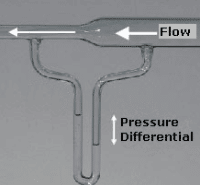 Most simply, Bernoulli’s Principle is a derivation of the conservation of energy. The sum of all the energies in a steady flow of a fluid (a gas or a liquid) must remain constant. So, if the fluid is forced to move faster, it creates an area of low pressure to compensate. This principle may seem simple, but it led to the development of two very important machines in the 1900s: the carburetor and the airplane. Bernoulli’s Principle also explains many natural phenomena, like supercell storms.

In strong supercell thunderstorms, wind moves upwards at over 90mph. Fast-moving air creates an area of low pressure, or a partial vacuum. Nature abhors a vacuum, so nearby air rushes in to join the updraft. This skyward flow can be powerful enough to suspend grapefruit-sized hail.

The tendency of a speeding air current to suck in surrounding air molecules stems from the same idea that gets airplanes off the ground: Bernoulli’s principle. The faster a fluid moves, the lower its pressure. 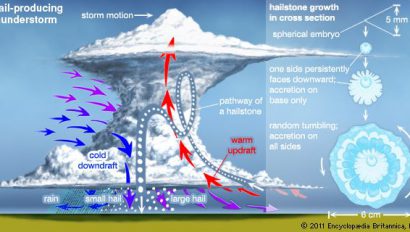 Additionally, Bernoulli’s Principle is critical in the design of airplane wings and allowing them to generate lift. A Boeing 747 weighs around 750,000 pounds, so how does it manage to get off the ground?

The bottom of the wing is flat, while the top part is rounded. As the wing cuts through the air, the gas going over the top has a longer path to take, which requires it to move faster than the air underneath the wing. 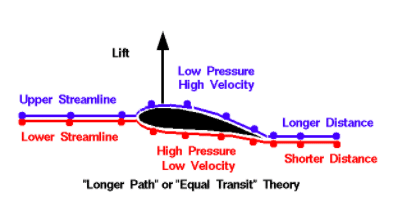 This creates a low pressure area on the top of the wing. The pressure difference between the top and bottom causes an upwards force to be exerted on the wing, allowing the airplane to fly. While this is not the only source of lift, it is an important factor that allows airplanes to work the way that they do!

The carburetor is the precursor to modern automobile and aircraft engines. Using Bernoulli’s Principle to control the flow of fuel and air, it allowed automobiles and airplanes to control their speed and acceleration with relatively high precision. More efficient methods have since been designed, but without the basis of Bernoulli’s Principle, these machines would never have been developed in the first place.

Aircraft and thunderstorms provide some of the most dramatic examples of this concept, but it’s also surprisingly easy to explore at home or in class.

All you need is moving air and something to reveal its motion! A long, narrow bag and a working set of lungs are the perfect tools. Try to blow up eight feet of plastic bag like you would a balloon and you’ll find yourself struggling for air. Instead, hold the bag’s opening ten inches from your face, and blow into it across the gap. What’s the difference?

When your breath travels through a volume of air before reaching the bag, Bernoulli’s principle does most of the work for you! Your exhalation is a fast flow, so it creates a sink of low pressure moving into the plastic bag. Nearby air rushes in to fill the partial vacuum, and before you know it, the bag is fully inflated.

Firefighters clearing smoke from buildings take advantage of Bernoulli’s principle in almost exactly the same way. A fan placed directly in a door or window will move air through the structure. Set the same fan a short distance back from the opening, and it pulls in more air, getting the job done faster.

Using a hair dryer to levitate a ping pong ball is a classic do it at home science experiment. It utilizes two basic principles to keep the ball hovering in the air. The first principle is the transfer of momentum from the moving air particles to the ping pong balls. Basically, the moving air hits the ball and exerts a force upwards on the ball. This is fairly intuitive straightforward. Bernoulli’s Principle is the law responsible for keeping the ball contained in the airstream and it is much more complex and interesting.

Bernouli’s principle states that the faster a fluid or a gas move around an object, the less pressure they exert on it. What this means for the ping pong ball is that as the air moves around it, there is less pressure pushing on it from the sides. However, if the ball tries to leave the airstream (because of the collisions from the moving air or due to gravity) it will encounter some stationary air that exerts a higher pressure back on the ping pong ball. Essentially, the ball is encountering a wall of static air that bounces the ball back into the airstream. Now because the wall is made of air it doesn’t take too much force to break the barrier, but as long as you keep the hair dryer fairly steady you should be able to keep the ping pong ball levitating for a while. Sadly there were no hair dryers back in Bernoulli’s day, but we’d like to think he would have fun with this experiment if he did.

Imagine trying to dig a hole in a pool of water: as soon as some of the water gets moved out of the way, the surrounding water rushes in to take its place. Air does the same thing: whenever it moves, the lower pressure draws air in around it!

The cup and straw demonstration shows this nicely, and it’s also a great experiment to try at home! By taking each apparatus and blowing into it, we can see there is a pretty huge difference.

Inside the cup, air is moving quickly. This causes a lower pressure inside the cup than outside, and air that tries to fill up the space suctions the balloon in place. Alternatively, the cup with holes in the sides allows the surrounding air to help out. Very similar to the Bernoulli Bag, nearby air joins in creating a larger column of air that can lift, and even suspend, the balloon.

We know this looks like a trick, because it’s hard to tell from watching that he is exhaling vigorously in both cases. If you don’t believe us, definitely try it yourself! Of course, it is possible to hold the balloon into the cup by inhaling, but it’s actually more difficult to suck up the balloon from a short distance away! The difference in pressure from blowing fast moving air into the cup is more effective at sucking up the balloon.

Levitate a Soda Can

All you need is an empty soda can and a mug big enough to contain it.

Place the can inside the mug and blow air into the gap between the two containers. Your breath moves faster than the surrounding air, so it creates an area of low pressure around the sides of the can. Stagnant air trapped underneath the can expands to fill the partial vacuum, pushing the can upwards. With a little practice, you’ll be able to jump the can from one mug to another!

Want to learn more about Bernoulli’s Principle and other incredible science experiments? Sign up for AstroCamp today and check out our dates and rates for the summer!