If you’re a big baseball fan, you might be wondering how curveballs and other pitches actually work. Well, wonder no longer! It all has to do with the 216 raised red stitches altering the airflow around the ball and something called the Magnus Effect.

The Magnus effect allows pitchers to throw curveballs, soccer players to bend kicks around defenders, and golfers to launch drives along near-triangular flight paths. This fun physics phenomenon relies on the difference in relative airspeed at various points on the surface of a round object.

Picture a ball moving through the air while spinning. For the ball to experience a net force, its axis of rotation must be oriented so that some points on the ball’s surface move in the same direction as its trajectory (let’s name one of these points A) while some move the other way (we’ll call an example of this type B). 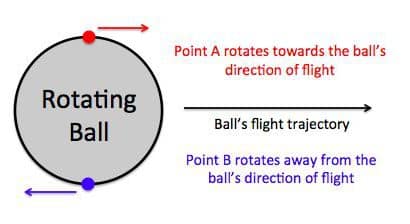 At point A, the air dragged along by the ball’s surface and the air farther away rush past each other in opposite directions; at point B, they move in the same direction, although one still moves relative to the other (unless rotational speed and flying speed are perfectly matched). This is a bit like the difference between two cars going in opposite directions on the highway and a car in the fast lane passing one in the slow lane.

Like a boat traveling through water, the ball leaves a wake behind as it cuts through the air. The differences between relative airspeeds around a rotating ball cause its wake to pull to one side, resulting in an asymmetrical imbalance of air pressure. This lopsided push bends the ball’s path as it travels.

Fastballs vs. Curveballs: it Depends on Air Speed!

If the ball leaves the pitcher’s hands spinning counterclockwise like above, the stitches are causing air to move faster above the ball than it does below. If you remember our post about Bernoulli’s Principle, you’ll know that this creates a lower pressure zone above the ball. That lower pressure causes a form of lift referred to as the Magnus Effect, keeping the ball from dropping as much on its way to the plate, delivering a fastball to the batter.

If the pitcher instead twists their wrist in another direction, the Magnus Effect pulls the ball in the direction of lower pressure. Pitchers can use this to make balls drop to the ground quicker or veer off to the side, giving curveballs their namesake.

To learn about science and physics while playing your favorite sports, sign up for AstroCamp and have an educational summer you’ll never forget.