Bang! Pow! The Physics Behind Collisions

Newton said that for every action there is an equal and opposite reaction. Collisions are the thing that happens when two objects slam into each other! But what does that mean for science? Well, depending on the object’s material (such as using silly putty vs using marbles, skee balls, or shots), mass, and vector (magnitude and direction) it can mean a few things.

When cars, billiard balls, or football players collide, their momentum doesn’t just disappear. It has to go somewhere. Some collisional energy dissipates as heat, and some causes the incoming objects to recoil. Take a basketball hitting the ground. Both the ball and the ground become a little warmer than they were before.The basketball also deforms, storing elastic potential energy, which changes into kinetic energy as the ball pushes off and launches back into the air.

Momentum is defined as the strength or force that something has when it is moving. Most ordinary collisions that you witness are considered inelastic because of the sounds you hear (sound=type of energy -> total kinetic energy – sound =loss of kinetic energy), or the heat released (same as above). The most elastic-like collision is when two billiard balls collide (or like in our experiment)  they are technically inelastic collisions because the loss of energy in the sound, but that energy is negligible (meaning that it doesn’t matter a whole lot).

To play around with different outcomes of mostly elastic collisions you can change a few variables such as mass, density, and velocity (speed and direction).

Learn More About Physics at AstroCamp!

When a ball hits the ground, its center of mass keeps moving down for as long as the ball’s elasticity allows. As a result, the ball is vertically squashed for a moment before it bounces back up.

The heavier a thing is, the more momentum it has in motion. Inertia depends on mass, too: the lighter an object is, the easier its motion is to change. When a bug hits a car windshield, the bug’s path changes dramatically, while the car is almost completely unaffected. The bug’s inertia and momentum are comparatively small, so the dynamics of the collision are dominated by the car’s movement. The same science applies when we drop a stack of bouncy balls of various sizes. 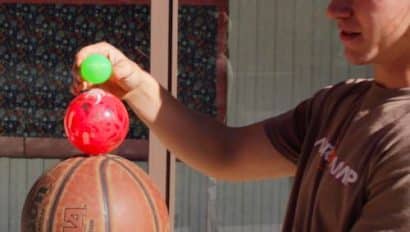 At first, all three balls move together towards the ground. When the basketball makes contact, it stretches and deforms, then reverses direction, putting it on a collision course with the next object in the stack. The basketball is much more massive than its neighbor, so its motion dominates when they crash into each other. Unlike a bug and a windshield, however, the balls don’t stick together. Instead, the basketball’s momentum is transferred to the smaller ball.

Momentum is directly related to both mass and velocity. If momentum is held constant, then when mass goes down, velocity goes up. The smaller, lighter ball is launched with impressive speed! Adding a third, even smaller component to the system compounds the effect.

Interested in learning more about physics? Sign up today for AstroCamp this summer or learn more here about our camp programs!