Carbon dioxide, or CO2, is one of the handful of compounds that most people are familiar with. People and animals breathe it out, plants love it, and we make a lot of it, which probably has some consequences. We are going to look at this well known gas in its solid form and hopefully answer any questions that come up along the way!

Why Do We Call it Dry Ice?

Solid carbon dioxide is more often referred to by the name dry ice. This is because it never leaves behind a wet spot when it disappears. Unlike water, which will melt to a liquid naturally under normal conditions at room temperature, dry ice will instead skip to a gas. To the left, you can see dry ice under water releasing bubble after bubble of transparent carbon dioxide gas. This physical transition from a solid to a gas is called sublimation, and isn’t anything to be afraid of. It’s just the less familiar cousin of evaporation and condensation, and the key is pressure.

At standard pressure of one atmosphere, liquid CO2 is unsustainable and any solid carbon dioxide above -109℉, or -78℃, directly converts to a gas. In order for liquid CO2 to exist, the pressure needs to be increased to at least 5.11 atmospheres. 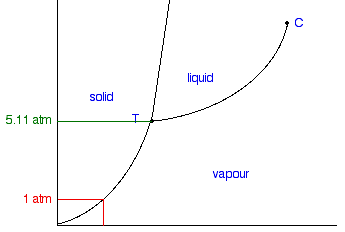 Just as increasing pressure aids substances in changing down in state, decreasing pressure facilitates changing up in state. At sea level, the boiling point of water is 212 degrees Fahrenheit, but if you live at 5500 feet like those of us at AstroCamp, that boiling point is decreased to 201.5 degrees. This 10.5 degree difference may not seem significant, but that’s the result of a change of less than 0.2 atm. In a vacuum chamber, water will actually boil at room temperature because of the immense drop in pressure.

Here, we put our dry ice in a bowl of warm water. Water is constantly evaporating, and this warm water is no exception. As a result, the air above the water is very humid as it contains a lot of this evaporated water. One important thing about dry ice that hasn’t been mentioned yet: it’s cold. Like -109℉ cold. Brrr!
Adding it to the water causes air temperature to drop, forcing the water vapor in the air to condense. If it looks like fog, that’s because it is! We have simply made a low-flying cloud in a bowl! Clouds in real life form the same way. Warm air carries water vapour up into the high, cold parts of the atmosphere where they condense in the same way, minus the dry ice, of course.
The cloud forming is independent from the bubble expanding. This is a bit tricky. As the water vapor cools down and condenses it is not pushing out on the bubble. However, the dry ice is sublimating. the resulting carbon dioxide gas takes up more space. Unfortunately, CO2 is colorless. This makes it look like the cloud is blowing up the bubble, but really the cloud is just filling up the space that the sublimated dry ice is clearing out for it, until the bubble bursts and the dense cloud falls to the ground, which looks really cool. It also raises a rather interesting question: If clouds are more dense than air, then what in the world are they doing way up there in the sky? The answer is a bit complex. The short version is that the tiny water droplets that make up clouds fall very slowly, but they tend to form in warm, rising, low pressure air that overcomes their slow fall, allowing them to float high in the sky.

Want to learn more and do high-quality experiments with dry ice? Sign up for AstroCamp and have a memorable, fun, and adventurous summer!